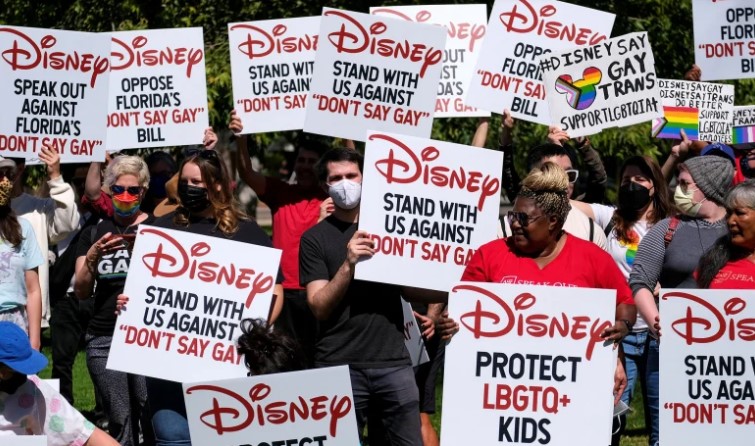 In their attempts to go fully woke, several name-brand companies are changing their market focus in order to accommodate a small number of Gen Z social activists.

As a result, Netflix, and other name-brand companies are dealing with the kickback from their existing customers.

Another one of the corporations, the formerly family-centered Walt Disney Co. has gone from the Happiest Place On Earth, to a sesspool of social justice activism advancing LBGTQ causes. An internationally renowned entertainment company that has moved from supporting diversity to overt activism.

In a company internal meeting, a Disney Executive Producer admitted to pushing the ‘Gay Agenda,’ ‘Adding Queerness’ wherever she could.

During a staff meeting on Florida’s recent enactment of the Parental Rights in Education bill, an executive producer at Disney said she was advancing a “not-at-all-secret gay agenda” to insert queerness into children’s animation.

Latoya Raveneau, the executive producer for Disney Television Animation, talked about how the studio’s treatment of her progressive ideas defied her negative expectations of the company, in a video obtained by journalist Christopher Rufo. Instead of vetoing her pitches for LGBTQ-friendly Easter eggs or overt references in her series, Disney gladly accepted and included them, she claimed.

“In my little pocket of Proud Family Disney TVA, the showrunners were super welcoming . . . to my not-at-all-secret gay agenda,” she said.

“Maybe it was that way in the past, but I guess something must have happened . . . and then like all that momentum that I felt, that sense of ‘I don’t have to be afraid to have these two characters kiss in the background.’ I was just, wherever I could, adding queerness. . . . No one would stop me, and no one was trying to stop me,” the radical activist said gleefully.

SCOOP: I've obtained video from inside Disney's all-hands meeting about the Florida parental rights bill, in which executive producer Latoya Raveneau says her team has implemented a "not-at-all-secret gay agenda" and is regularly "adding queerness" to children's programming. pic.twitter.com/eJnZMpKIXT

In addition to turning off 100K current and past customers, Disney earlier this year picked a political fight with Gov. DeSantis over the state’s Parental Rights in Education Law, which prohibits the teaching of sexuality and gender ideology — including transgenderism — to children in kindergarten through third grade.

In this game of chicken with their traditional customers, Chapek and Disney are losing. For the year, shares of Disney are down a whopping 62 percent.

In a letter to top company executives obtained by multiple news outlets, Disney CEO Bob Chapek said the austerity measures will be “difficult” but necessary.

“I am fully aware this will be a difficult process for many of you and your teams. We are going to have to make tough and uncomfortable decisions. But that is just what leadership requires, and I thank you in advance for stepping up during this important time,” he wrote.

“Our company has weathered many challenges during our 100-year history, and I have no doubt we will achieve our goals and create a more nimble company better suited to the environment of tomorrow.”

He said Disney will also be conducting a “rigorous review of the company’s content and marketing spending,” with all of these efforts being overseen by a newly formed “cost structure task force” comprised of Chapek, CFO Christina McCarthy, and general counsel Horacio Gutierrez.

President Donald J. Trump Widens Attack On Potential 2024 Candidates
Now Pelosi Says Biden Should Run In 2024 – ‘He Has Been A Great President’