When I reflect on my early years, it was rare for me to run into obese children in my neighborhood, schools, or on my sports teams.

We spent considerable time running around town with our friends which included joining in on pick up a basketball pick up game ETC.

As technology increased and as television channels went from 3 to over 100, the last several generations have become increasingly less active, and thus more obesity has been recorded.

With this in mind, the authoritarian COVID lockdown measures instituted over 18 months ago have allowed progressive unions to require in-home education for millions of students while preventing friends from meeting up and public sporting leagues from playing. 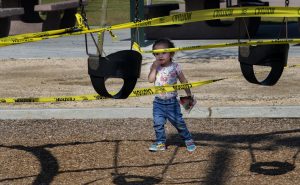 American children have been forced into isolation from their peers and placed into a poor learning environment that relies solely on virtual classes. Some schools have only recently begun accepting students back for in-person schooling, which could be too late to reverse the bad habits and results developed while trapped alone inside their homes.

For the past 18 months, children have been forced to spend more time in front of screens by themselves than ever before. The separation from their classmates and lack of instruction through Zoom calls have caused a massive increase in mental health issues, such as depression, that will take years, if not longer, for these kids to work out.

Now, in addition to the mental, the physical effect of these lockdowns is also becoming clear.

According to a stunning new report that was published last week by the CDC, the body mass index for American children increased between March and November 2020 at almost 2 times the rate that it did before the China-virus pandemic began.

The study looked at over 430,000 children and found that the increase was particularly prevalent among elementary-aged children. Kids who were already considered overweight also experienced one of the highest increases during the timeframe.

New CDC Study: "the portion of 5-11-year-olds who are classified as overweight or obese is now 45.7 percent, up from 36.2 percent before the pandemic."

Michelle Demeule-Hayes – the director of a clinical weight loss program at Baltimore’s Mt. Washington Pediatric Hospital – said that the youth obesity crisis has “never been this bad,” which according to her, proves that “the research is definitely accurate.”

Demeule-Hayes has even had an uptick in patients – all children younger than 17 – being referred to her that weigh around 400 pounds. She has also seen more and more who are being diagnosed with conditions that are typically seen in adults, such as osteoarthritis, hypertension, and high cholesterol.

“Having them be on a computer literally all day, not having any of the recess or the steps outside or even just walking up and down the halls — they’ve been so, so sedentary,” Demeule-Hayes explained.

“Pre-pandemic, even if they were getting driven to school, they were still at least walking around the school and walking up one or two flights of stairs to classrooms.”

It will take a concerted effort on the part of families to get their children reacclimated to active schedules and much better health in return.