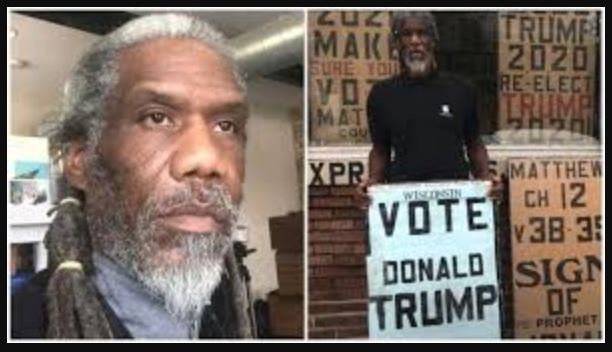 Bernell Trammell, a known Trump supporter in Milwaukee, WI was fatally shot outside of his business office Thursday afternoon.

Director of Milwaukee’s Office of Violence Prevention, Reggie Moore, said he was recently involved in resolving a dispute between the late Trammell and a young man, according to the Milwaukee Journal Sentinel.

Moore said he believes the dispute was related to a Trump sign Trammelel was carrying.

Trammell had finished an interview that morning with a local blogger, Armstrong Ransome, who was curious about Trammell’s support for President Trump.

Trammell told Ransome about his faith, why he supports Trump and described an event a few days earlier where a young man held a sign with “like” written on it next to Trammell’s “Vote Donald Trump 2020” sign.

According to Trammell’s interview, the young man antagonized Trammell for an hour.

Community leaders and friends described Trammell as friendly and while he openly expressed his views, that most in his community disagreed with, he never tried to force his opinions on others.

Chairman of the Wisconsin Republican party gave his condolences to Trammell’s family and called for a Federal investigation over his death, as it may have been politically-motivated.

“Because of Trammell’s well known political activism and the possibility that his murder could be politically motivated, I respectfully request that United States Attorney Matthew Krueger open an investigation into this heinous crime…No American should fear for their personal safety because of where they live or their political affiliation,” he added.

“It is tragic to learn of the senseless murder of Bernell Trammell, and I offer my sincere condolences to his family and friends. –@AndrewHittGOP (1/3)

“No American should fear for their personal safety because of where they live or their political affiliation.” (3/3)

“He believed in democracy. He believed in his right to free speech,” John Self, a community member who would reportedly have philosophical talks with Trammell, told CBS-58. “I don’t think he ever once tried to convert you or change you. He would just tell you what he thought, he would listen to what you had to think, and then he would respect that.”