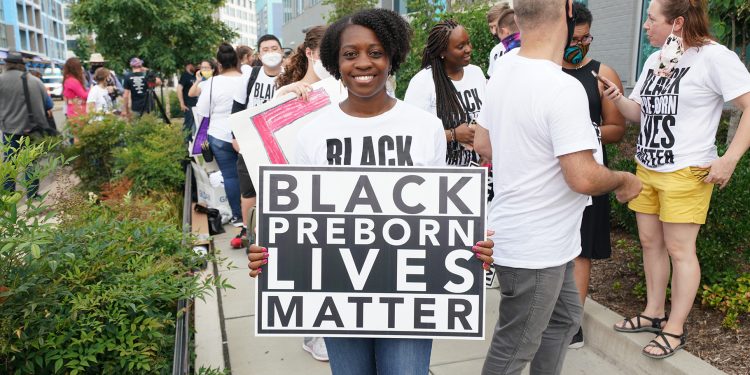 She Had an Abortion In High School. Now She’s A Leader in the Pro-Life Movement

Toni McFadden had an abortion when she was in high school, uninformed of the health effects and ethics that surround the procedure – not to mention the foundational racism that saturated the abortion industry from the beginning.

But McFadden is now a leader in her community and works to empower women to choose life.

“I had an abortion when I was a senior in high school. I was very uneducated about the truth about abortion and I didn’t understand that as a black woman that we’ve had a target on our backs when it comes to abortion…I was given the RU-486 pill, the abortion pill, I was about seven weeks along. I had complications with mine and actually started hemorrhaging two months later and probably could have died.”

McFadden then credited God with her survival:

“But thanks be to God I’m still standing here today and now I am fully pro-life from womb-to-tomb and hoping to educate black women and black men to rise up and be a voice to the voiceless to restore broken generations against abortion.”

After the physical and emotional trauma caused by her abortion, McFadden now uses her story to help other women understand the horror behind abortion. Her first organization focuses on a proactive means of avoiding unplanned pregnancies.

“I run two organizations. One is called Relationships Matter, which seeks to empower youth and young adults on saving sex for marriage by giving them tools to combat the culture because the culture has degraded sex, and in the process, they have been degraded as well.”

McFadden’s second organization seeks to empower women and expose the lies that the pro-choice community advances.

“My other ministry is called Pro-Exit. It’s five black women who are rising up to help black women exit the curse of abortion because Margaret Sanger said ‘we don’t want the word to get out’ and we are saying the word is out and we are going or exit the cause of abortion. We a going to empower women and we’re going to restore our future generation.”

McFadden gave a final message to women and men who are considering abortion today:

“You do not have to give in to the lie that abortion is your only option. Yes, it may be difficult but it is going to be worth it in the end – always choose life.”