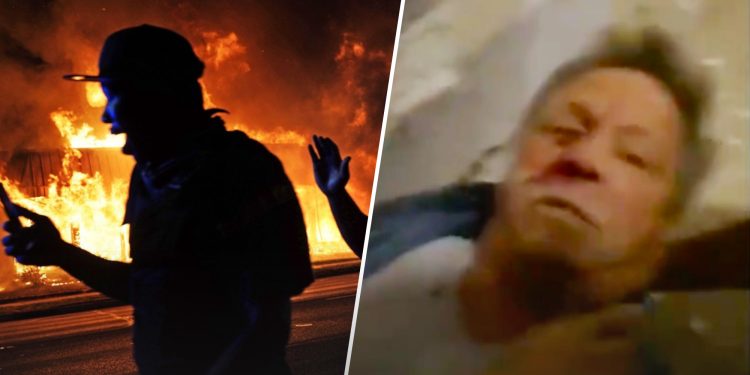 GRAPHIC VIDEO: Looters Break Jaw of 71-yr-old While He Defended A Local Business

A 71-yr-old man was left with a broken jaw and deep lacerations to his head after looters in Wisconsin attacked him while he defended a local business from being ransacked and set ablaze.

The elderly defender, Robert Robb, reportedly saw live coverage of buildings near Danish Brotherhood Lodge and The Mattress Shop being looted and set on fire, which prompted him to leave and defend the facilities.

Cobb is seen in a video spraying looters with a fire extinguisher in efforts to deter their vandalism.

Cobb was struck with a water bottle filled with cement, breaking his jaw in two places and knocking him to the ground.

A local citizen immediately rendered aid to the elder victim and is reportedly overheard saying that Cobb is drowing in his own blood.

The woman who took the video is heard shouting at the attackers and running towards the man’s aid:

He didn’t deserve any of that, any of it…This is just wrong guys, do you not see this?”

Another woman, presumed to be participating in the looting, responded to the woman taking the video:

“Were just trying to protect ourselves…You don’t understand what terrifies these Black men out here … Understand, respect. How ’bout that.”

Moniz, the ownder of the show Cobb was defending, shared an emotion statement on the attack:

“I absolutely cry every time I talk about it because this man did this for me…He did it because that is the kind of person he is. He is so giving; so selfless.”

Moniz said that she will use her business to help take care of Cobb.