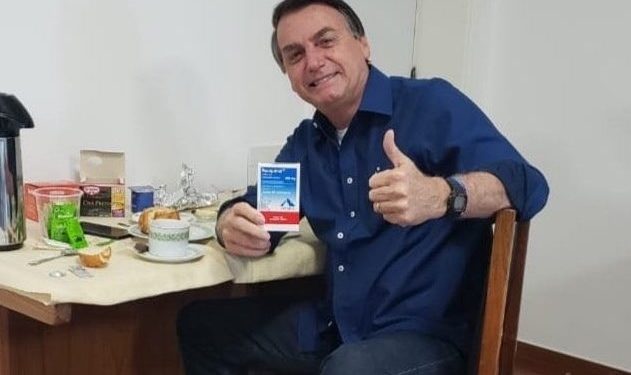 Brazilian President Jair Bolsonaro tested positive for (DiseaseThat Must Not Be Named) on July 7th, 2020.

On July 25th, he tweeted a celebratory message saying he kicked the virus with a picture of him holding a packet of hydroxychloroquine.

The tweet translates as “RT-PCR for Sars-Cov 2: negative. Good morning everyone.”

RT-PCR (Reverse Transcript, Polymerase Chain Reaction) is a method gaining traction to detect (DiseaseThat Must Not Be Named).

In a video posted to Bolsonaro’s Facebook, the Brazilian president praised the drug and the positive results that he’s seen in his own health since taking it.
I drank hydroxychloroquine and I’m feeling pretty good.

– A good afternoon to all.

Bolsonaro was fair to acknowledge that no drug has been proven to be the ultimate cure to (DiseaseThat Must Not Be Named), but provided his personal endorsement based on his experience:

“I’m one more person it’s working on. I trust hydroxychloroquine.”

President Trump has been targeted fiercely by media outlets and primarily liberal advocates in response to his support for hydroxychloroquine. However, more and more we’re seeing an increase in support for the drug given its apparent positive results and an incredibly small amount of reports about negative results.