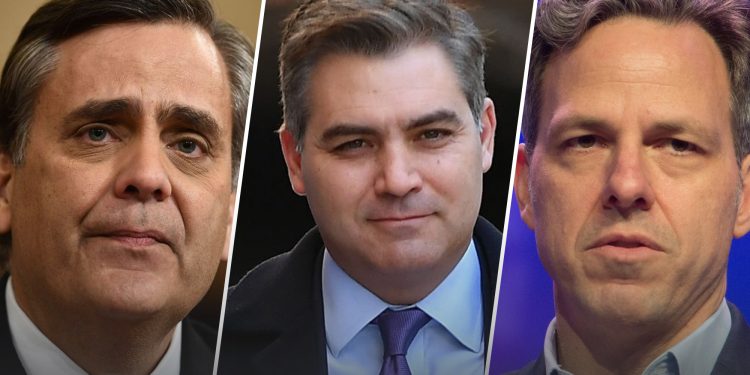 CNN’s Jim Acosta got both barrels this week targeting his unabashed bias towards the Trump administration.

Acosta, who serves as CNN’s chief White House correspondent, has pulled no punches in manipulating his coverage of President Trump while routinely throwing condescending questions and comments towards White House press secretaries.

Well, it came back to bite him this time.

Goerge Washington University Law Professor Jonathan Turley called Acosta out this week in a scathing article “A Tale of Two CNNs: Acosta and Tapper Capture the Worst and Best Moments For A Network Struggling With Objectivity.” The article reflects on the fall-from-professionalism that CNN has displayed, specifically exhibited in a context-less tweet Acosta posted about White House Press Secretary Kaleigh McEnany.

McEnany was addressing the COVID crisis and expressed how Trump wanted children to get back in school:

The science should not stand in the way of this, but as Dr. Scott Atlas said — I thought this was a good quote, ‘Of course, we can do it. Everyone else in the Western world, our peer nations are doing it. We are the outlier here.’ The science is very clear on this. For example, you look at the JAMA pediatric study of 46 pediatric hospitals in North America that said the risk of critical illness from COVID is far less for children than the seasonal flu. The science is on our side here. We encourage localities and states to just simply follow the science. Open our schools.”

Acosta’s tweet was less-than articulate in his reflection of McEnany’s statement:

“The White House Press Secretary on Trump’s push to reopen schools: ‘The. Science should not stand in the way of this.’”

“That was clearly and absolutely false. However, Acosta knew that it would play well in the eco-journalistic model adopted by CNN. He quickly racked up 30,000 retweets. He then later added that McEnany actually meant the opposite. That received less than 700 retweets. It is the ultimate example of the demand of many viewers to only hear news that supports their own bias and adds to a type of journalistic comfort zone.”

Acosta eventually did tweet another statement that, when paired with his first tweet, would provide fair context to McEnany…but that’s obviously not what happened.

However, let’s not throw the baby out with the bathwater. CNN’s Jake Tapper still shows forms of objectivity and fairness in his reporting and analysis. Turley pointed out that while Tapper was speaking with CNN’s chief medical correspondent Dr. Sanjay Gupta, who also kept repeating the same manipulative line as Acosta, Tapper corrected Dr. Gupta:

“If I could just say, Sanjay, I think she was just trying to say that the science shouldn’t stand in the way because the science is on our side. I don’t know that all of the science is on their side- and certainly, this White House, their respect for science knows bounds, let’s put it that way, but I think that’s what she was getting at.”

Turley concluded his article by undermining the professionalism of CNN’s. journalistic habits:

I truly miss the old CNN. Many people feel that there is simply no source of objective news in this environment and are turning off the coverage. The loss to journalism is immense. Indeed, if anything, it may be driving people to Trump.

That last line…read it again.

“Indeed, if anything it may be driving people to Trump.”

CNN, keep up the good work!