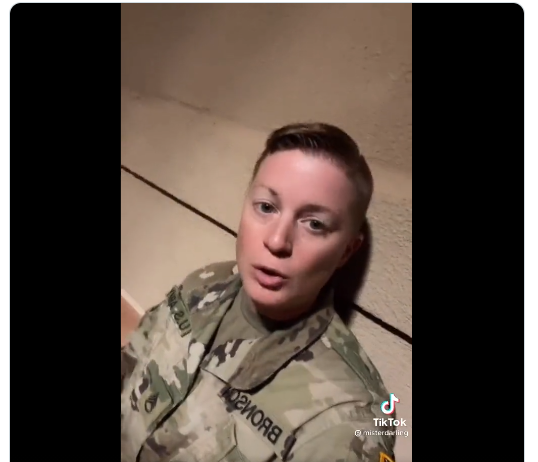 The US military was built on the idea that individuals agree to serve with other patriots, as a unit, to defend the citizens of our nation. Our nation’s history is replete with stories of heroism and military victories. Rough, tough, and passionate for liberty willing to lay their life down for others.

Starting with former President Obama, the military became a testing ground for social changes including supporting homosexuals serving openly in all branches.

Jason Beardsley, an executive director of the Association of the United States Navy, has been sounding alarms of SJW indoctrination in the military.

Beardsley warned  in June; “Wokeness is well on its way to poisoning our military” and with current policies,  “morale and discipline of the command may also be at risk.”

Woke, Gen. Milley says that it’s “offensive” to think that the military is too “woke.”

“I want to understand white rage, and I’m white,” he said.

Lesbian activist Cindy Bronson spends time on social media making statements, even threatening Americans. The problem is she is in the military and seems ready and willing to shoot US citizens.

Army Sergeant Cindy Bronson has a message for her fellow Americans in case martial law is declared: “Understand that if active duty military actually get deployed within the United States, that weapon is not just going to be pointed at other people, other countries, it’s pointed at you.”

Bronson was even daring and/or stupid enough to post her violent feelz on TikTok, the CCP-approved spyware masquerading as a social media app.

Veteran and 2022 congressional candidate Travis Wines was not impressed:

Oh, Staff Sergeant Cindy Bronson has got some sassy "intellectual" responses about how it's okay to point her weapon at a civilian "enemy" if she's just following [unlawful] orders. This doesn't fly. pic.twitter.com/eKnUVQ2EaW

Military regulations typically discourage soldiers from making political videos on social media. Bronson’s clip, which is a thinly veiled warning to critics of the government, goes beyond merely antagonizing a civilian and into the territory of undermining the military’s prestige and credibility as a politically neutral institution.

Bronson’s attitude will become more common unless new leadership is put in place, restoring national service focus over individual expression of their feelings.