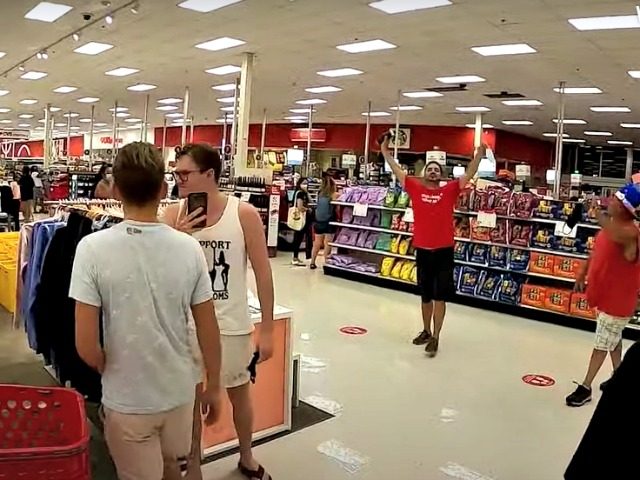 WOKE – Anti-Ma** Shoppers March Through Target, Urge Others to Liberate Faces: ‘We’re Not Gonna Take It!’

The CV-19 pandemic, which started in late January, has from the time of President Trump’s travel ban from China through today been a roller coaster for the USA.

The USA, as the Constitutional Republic, with strong state sovereign rights and police powers available to them during emergencies, was hesitant on how to handle the potential pandemic.

The Trump administration started sounding the warning Dr. Fauci & Dr. Birx were collecting information and meeting with the president.

Trump attempted to lead the country via providing the resources needed, such as medical equipment, plus a series of multi-Trillion dollar stimulus packages to help cover the financial losses of the millions who suddenly became unemployed and businesses who were not allowed to open.

The far-left leadership in the Congress and including their Presidential candidate, Joe Biden, were wrapping up their failed impeachment attempt of President Trump in January then spent the next 3 months accusing the president of racism & xenophobia for closing our borders.

During this time, NYC Mayor De Blasio, Speaker Pelosi, and liberal health commissioners assured their constituents that the virus would not have a significant impact on the USA.

Masks were called unnecessary and non-effective against the virus, including Dr. Fauci, the subways kept running, politicians did live news interviews in their Chinatown districts, inviting people to come down and celebrate the Chinese New Year with them, nothing to worry about.

When the left realized they were wrong, they quietly tried to change their positions and blame the Trump administration for not having enough medical supplies, not the federal government’s job, for their states as they closed down their communities and states. Every sports league, movie theater, church, and except for “essential services, businesses closed almost overnight.

Suddenly MASKS and “Social Distancing” were the answer to flattening the curve.

Over the next few months though, it became clear millions of people, from the modeling they used, were not going to die after all.

Thus the need for Americans to go back to regular life started to gain momentum.

My wife and others start to go into businesses, without a mask on, and of the most part have received very little kickback.

Here is a video of one of the never mask activists

A group of anti-mask demonstrators marched through a Florida Target to Twisted Sister’s “We’re Not Gonna Take It,” encouraging others to liberate their faces by removing their masks.

The group reportedly marched through a Target in Ft. Lauderdale on Tuesday, encouraging shoppers around them to take off their masks as well:

“Alright. We’re tired of shopping with masks on,” Chris Nelson, who organized the event, said while holding up his phone as “We’re Not Gonna Take It” began to play in the background.

“And now, we’re taking our masks off because we’re done with it,” he said as others began taking their masks off in the store.

“Breathe. Breathe. You’re Americans. Breathe,” one woman said as she marched through the store.

Cristina Gomez, the Florida woman who made headlines after speaking out against a mask mandate before the Palm Beach County Commission meeting over the summer, was among the protesters. During the meeting, she stated that masks are killing people and told commissioners that “We the People are waking up” while warning against the “devil’s law.”

“Take off that mask. That’s the only way it’s going to work if we all unite!” she exclaimed. “It’s all about choice.”

Video shows the group marching through the store singing along to the song.

“We’re not gonna take it anymore,” they sang as they marched through the aisles, encouraging others to join them.

One shopper briefly joined the protesters, taking off her mask and dancing as they cheered.

“We’re not gonna take it anymore,” she exclaimed. Shortly after, another woman took off her mask, earning her a “you go girl, alright!” from a member of the group.

“This is America,”  a man said as the group eventually exited the store.

One protester, Nathan Babcock, told the HuffPost they decided to make a statement because they have had “no voice in what is being done to us.”

“If you want to wear a mask and think [it] makes you safer … That’s absolutely your right, 100 percent. Just don’t force me to wear a mask,” he added.

Target is one of several major retailers that require customers to wear a face-covering in stores.

“While nearly 90% of our stores already require guests to wear masks or face coverings due to local and state regulations, we’ll be expanding that requirement to include guests at all stores nationwide as of Aug. 1,” Target announced in July.

“For those without a mask, team members will provide disposable masks free-of-charge,” the announcement continued. “Young children and those with underlying medical conditions will not be required to wear a mask.”

There you have it, who knows how fast the never mask group will grow, but eventually, they will win unless Biden wins on November 3rd, and demands national martial law, shutting down the country again.

Let’s just get President Trump re-elected, and very shortly we will back to living free, in our United States Of Amerca.