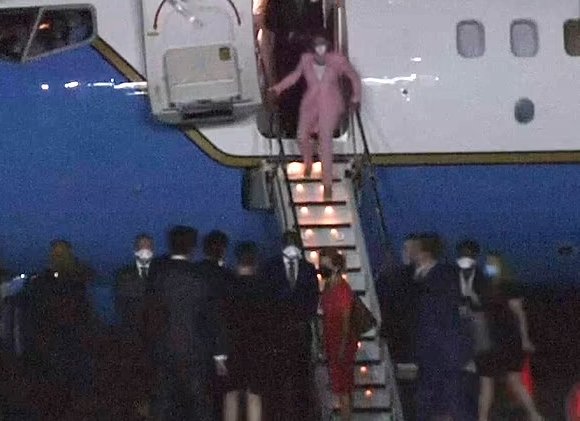 China considers Taiwan as part of its territory and protests diplomatic visits to the island, viewing foreign governments’ exchanges with them as public support for Taiwanese independence.

The Chinese Communist Party claims Taiwan, though technically a self-governing democracy with 23 million citizens on the Island nation, as its territory despite never having ruled it. Chinese leader Xi Jinping has pledged to “reunify” Taiwan with China by force if necessary.

The attention-seeking and more recently also virtue signaling Pelosi became the highest-ranking American politician to visit the island in 25 years when her military aircraft arrived at Songshan Airport close to 11 pm local time.

Wearing a face mask, she was greeted by Taiwan’s foreign minister  Joseph Wu, and staff from the American Institute in Taiwan (AIT).

She then tried to defend her trip.

“Our visit is one of several Congressional delegations to Taiwan — and it in no way contradicts longstanding United States policy, guided by the Taiwan Relations Act of 1979, U.S.-China Joint Communiques, and the Six Assurances. The United States continues to oppose unilateral efforts to change the status quo.”

In the Washington Post, Pelosi’s article written to be released after arriving was published:

“We take this trip at a time when the world faces a choice between autocracy and democracy. As Russia wages its premeditated, illegal war against Ukraine, killing thousands of innocents — even children — it is essential that America and our allies make clear that we never give in to autocrats.”

The People’s Liberation Army said it would stage a series of military drills including “long-range live firing in the Taiwan Strait” from Tuesday evening.

“This action is targeted at the US’s shocking recent major escalation on the Taiwan issue, and serves as a serious warning to Taiwanese independence forces or those seeking independence,” Shi Yi, a spokesperson for the Eastern Theater Command, said in a statement.

In addition, the official Xinhua News Agency announced military drills would take place from Aug. 4-7 in six areas that encircle Taiwan, giving coordinates for the exercises. “For safety reasons, relevant ships and aircraft should not enter the above sea areas and airspaces during this period,” Xinhua added.

In addition, China could leverage its advantage as Taiwan’s largest trading partner by sanctioning exporters, adding an additional boycott on some Taiwanese goods, or restricting two-way trade.

However, China must tread carefully as it needs Taiwan for semiconductors.

With its huge trade advantage over the US, any move to slow commercial shipping would further cripple China’s economy, which already has multiple issues they are dealing with.