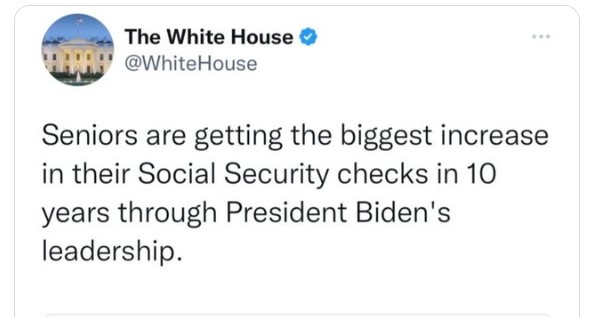 Even though Joe Biden’s administration has all of the resources at its disposal, it just can’t seem to do anything well, including posting tweets.

Based on salary data, the combined salary for 70 White House staffers would be roughly $6,695,436, not including equipment or other costs.

Even with the beefed-up social media team ready to advance propaganda for the delining US Chief Executive Officer, their lack of a, working knowledge of economics and real-world experiences, had them delete a tweet on Biden’s POTUS account, after getting fact-checked.

The White House was caught in another embarrassing Twitter gaffe this week after their tweet about the economy was debunked by a fact-checker. The botched tweet was quickly deleted, but not before it was captured and shared online.

“Seniors are getting the biggest increase in their Social Security checks in 10 years through President Biden’s leadership,” the administration claimed.

The tweet was fact-checked so the White House deleted it. Why?

As a result, the economy is the main concern for voters as they prepare to go to the polls in the 2022 midterms.

The larger than normal social security increase is due to the higher cost of living retirees are dealing with under basement Joe.

So now, let’s look at what the fact checker said:

When asked about the deletion of the tweet, White House Press Secretary Karine Jean-Pierre ignored a direct question from a pool reporter.

The clueless unqualified hireling instead nervously read from prepared notes, making little sense at the end of a 90-second rambling session.

The real problem for the White House is they had not been previously held accountable for Biden’s gaffes, lies, and exaggerations on Twitter.

Now that Elon Musk owns Twitter outright, the White House better get their facts in line before posting on the now-open public square, where opposing forces are ready to fact-check away,