“Whether He Knows it or Not, He Will Be Leaving” – Pelosi Says Trump May Have to be “Fumigated” Out of the White House (VIDEO)

Appropriate decorum left Capital Hill right after President Trump took office. The Pelosi House majority was beating a drum of moral superiority claiming President Trump was vile and offensive in language and conduct. They said over and over again his actions were unbecoming of a President Of The United States.

Things changed with the arrival of the “Squad”. This inexperienced group of anti-white, anti-Israel Marxists included; Democratic Reps. Alexandria Ocasio-Cortez, Ilhan Omar, Ayanna Pressley, and Rashida Tlaib. It started with a November Instagram post by then-representative-elect Ocasio-Cortez – a photo of the four congresswomen seated together, captioned “Squad.” 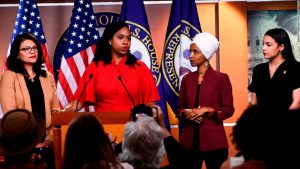 Their language, ghetto antics, and efforts to hi-jack the US House from Speaker Nancy Pelosi worked. Within a year the Speaker’s tone, language, and actions removed their higher than thou claims but instead resorted to viciousness to prove to her constituents she was going toe for toe with the President.

Here was the Speaker at it again Sunday.

House Speaker Nancy Pelosi (D-CA) on Sunday said President Trump may have to be “fumigated” out of the White House.

The Democrat-media complex exploded this weekend after President Trump refused to commit to the election results if he loses in November.

“I have to see. Look … I have to see,” Trump told Fox News anchor Chris Wallace during an interview on ”Fox News Sunday.” “No, I’m not going to just say yes. I’m not going to say no, and I didn’t last time either.” The Biden campaign responded: “The American people will decide this election. And the United States government is perfectly capable of escorting trespassers out of the White House.”

Pelosi slammed President Trump during an appearance on MSNBC.

“Whether he knows it or not, he will be leaving,” said Pelosi.

“I’m second in line to the presidency, and just last week, I had my regular continuation of government briefing,” the Speaker said. “This might interest you because as I say to them, this is never going to happen, God willing, it never will — but there is a process. It has nothing to do with if a certain occupant of the White House doesn’t feel like moving and has to be fumigated out of there because the presidency is the presidency. It’s not geography or location.”

So the dishonorable Speaker equated President Trump to a trespasser and some form of a rodent, who would require fumigation to get out him of the White House. Hopefully, America wakes up and votes all the real rats (leftists) out on November third, putting the GOP back in power in 2021, and getting to work to MAGA.