I can only imagine what the streets of Portland are like, for the law-abiding citizens. We see the reports of what the anarchists are doing, but not when they go back to whatever they call home, and get ready for the next time they are called to action.

One bi-product of the national shutdown is the millions of Americans who are getting paid thousands of dollars a month, on unemployment. With the extra $600 a week, the social outcasts, snowflakes, and delusion hyper Marxists are spending their time causing havoc in pursuit of “Justice” for black Americans. In addition, millions of far-left Marxist educated college students are out on summer break, allowing them to also protest for BLM, a domestic terrorist group rioting in weak progressive cities. 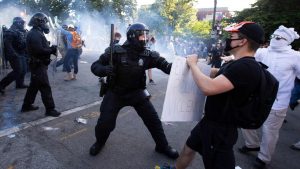 One of the epicenters of domestic terrorism has been Portland, Oregon. The violence has been increasing and after 3 plus months of unrest, the federal security forces were dispatched to the city. Unlike the castrated local Portland police, this group of professionals takes care of business.

Check out the following story from InfoWars – watch the entire video for context.

An anarchist protester in Portland showed off multiple rubber bullet wounds which he claimed happened after he was “peacefully protesting” outside the fenced-off Mark O. Hatfield United States Courthouse.

The Antifa terrorist claimed he was merely banging on the fence chanting, “Black Lives Matter,” and “All Cops are Bastards,” “literally just standing there,” a cohort describes when federal agents shot him.

After giving the BLM thug an opportunity to come clean, the cameraman then asks the man whether he was the person who was attempting to fan the flames of a fire started in front of the courthouse, which he denies, before quickly moving to vacate the area. The video then cuts to footage of the man, wearing the same shirt and bag, jumping over the fence and fanning the flames.

Lies, lies, and more lies. He is lucky he lives in the USA, most other countries might have used real bullets. America must wake up and put an end to open tyranny in our cities.