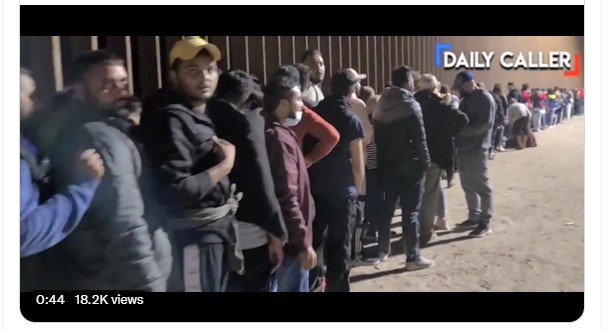 Even though it is still technically a violation of U.S. Code to aid and abet an illegal alien, Biden’s DHS has removed many of the regulations that are intended to prevent illegal entry.

A criminal is someone who; “knowing that a person is an alien, brings to or attempts to bring to the United States in any manner whatsoever such person at a place other than a designated port of entry or place other than as designated by the Commissioner, regardless of whether such alien has received prior official authorization to come to, enter, or reside in the United States and regardless of any future official action which may be taken with respect to such alien;“

A Daily Caller reporter went out to the Yuma, AZ / Mexico border at 2:45 AM.

So who are the 3 plus million illegal aliens boldly entering our “sovereign” nation annually?

What did he see, a group of hungry, desperate families from Mexico fleeing the Cartels in their hometowns?

Nope, the freelance reporter, Jorge Ventura, spoke with large groups of migrants waiting to be apprehended by border patrol.

Many of the were single males from India who were crossing.

Why are people from India coming across our border? https://t.co/VCKMTFkcNr

The various and and increasing number of videos showing foreign nationals, from over 150 countries, lining up to be intentionally arrested by the U.S. Border Patrol is infuriating for people like me.

Immigration and education or the 2 portals leftists are using to rapidly destroy traditional America, and at this time there is nothing that We The people can do about it.

The 2022 and 2024 elections will determine if the United States will continue.

Only patriots who are willing to reverse everything Biden and Obama did, deport 30 million people, lockdown our borders, etc will do.