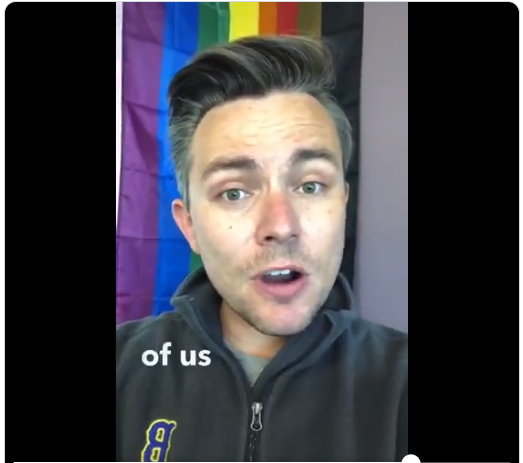 The past decade has done one thing for sure, brought out the far-left activists.  Adults who have access to children for several hours a day, known as teachers, have been getting caught on video exposing their activist views and actions to the dismay of parents everywhere.

With support for Barak Obama and now Joe Biden, these “social justice” Marxist fascists now feel emboldened to take over environments, like school classrooms, hoping to mold the next generations into their worldview.

A recent example is a Virginia high school English teacher who created a firestorm after posting a now-deleted Tik-Tok video in which he attacked teaching children rudimentary behavior skills as “white supremacy.”

Thompson believes “Schools are political” – He envisions an education system that actively advocates for social and racial justice.

“Josh Thompson, a high school English teacher in Blacksburg, Virginia, envisions an education system that actively advocates for social and racial justice,” NEA wrote in June 2020, introducing his piece in which he discussed “growing up as a closeted gay kid.”

PBIS helps teachers and administrators learn about and implement new techniques that reduce disruptive student behavior, which typically leads to office referrals, in school suspensions, and out-of-school suspensions that decrease instructional time for students. Based on extensive research, PBIS utilizes a positive approach to discipline. PBIS ultimately impacts the very culture of the school to shift attention to positive behavior and successful learning systems for children, teachers and administrators.

Thompson is heard saying in the video:

According to Fox News, the Montgomery County Public Schools (MCPS) said about Thompson’s video, “A teacher is entitled to their personal belief regarding any division program.”

“The statements made by this teacher do not reflect our PBIS program or the behavioral expectations that we have of students in our schools,” the district said, adding, “MCPS has used PBIS in our schools for eight years. We are proud of our PBIS work. This work helps create a standard for social-emotional learning and behavior expectations in the school building.”

In another video, Thompson is heard describing “whiteness” as a “racial ideology”:

“Whiteness is a racial ideology” pic.twitter.com/rz4zw4myVH

Is there any wonder why Virginia is moving farther left each decade?

If parents in Virginia and other states who are under attack by far-left activists like Thompson don’t stand up, preventing activists like him from expounding anti-white propaganda from their lecterns, the future looks bleak from the students, cities, state, and nation as a whole.

Solutions include homeschooling the children, closing the US Department Of Education, moving all education locally with strict guidelines in place.