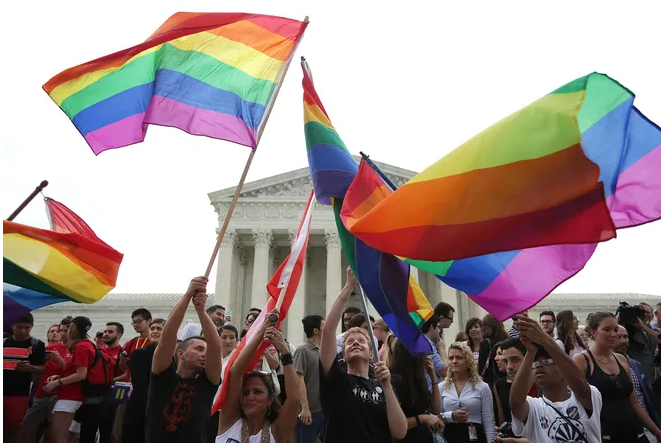 On Tuesday evening, the US Senate passed the ‘Respect for Marriage Act’ by a filibuster-proof 61-36 vote.

The bill originated following the Supreme Court’s overturning of Roe v. Wade. Democrats sponsoring the legislation insist that the Supreme Court could use the Dobbs decision to overrule the Court’s Obergefell gay marriage decision.

The RFMA would repeal the Clinton-era Defense of Marriage Act and would require the federal government to recognize any marriage that was “valid in the place where entered into.”

Democrats were joined by 12 Senate Republicans who also initially voted to advance the bill. The legislation will now go back to the House for a vote” as early as next Tuesday”, where it was first passed over the summer with the help of 47 Republicans.

61-36: Senate passes marriage equality legislation to protect same-sex and interracial marriages under federal law. 60 votes were needed. The Respect for Marriage Act now heads back to the House for final approval. pic.twitter.com/vKvliW5pIU

The House Republicans will have to decide whether they want to join Democrats in passing the Senate’s amended version that includes a “No Impact on Religious Liberty and Conscience” amendment created by a bipartisan group of senators who say the text protects religious liberty.

It was necessary for social conservatives who believe the bill would most likely violate the First Amendment of the Constitution.

“Congress shall make no law respecting an establishment of religion, or prohibiting the free exercise thereof; or abridging the freedom of speech, or of the press, or the right of the people peaceably to assemble, and to petition the Government for a redress of grievances.”

The bill is a major concern for those whose deeply held religious beliefs prevent them from supporting, encouraging, or advancing homosexual activities as they are considered to be sinful, and in direct conflict with God’s plan for marriage.

In what could lead to the targeting of those who oppose homosexual marriage, etc, there is a “private right of action” clause embedded in it.

It allows “any person who is harmed by a violation of subsection (b)…[to] bring a civil action in the appropriate district court of the United States against the person who violated such a subsection for declaratory and injunctive relief.”

In addition, attorneys general would be able to bring a civil action against any person who violates the law.