UN Says, Men Are The Problem! Everything Bad In History Was The Patriarchy’s Fault!

One of the most controversial organizations on planet Earth is the “United Nations”.

It was established in the aftermath of the Second World War to “promote international peace and security”.

One of its subsidiary purposes, according to its two founding Articles, is:

“…promoting and encouraging respect for human rights and for fundamental freedoms for all without distinction as to race, sex, language, or religion.”

After 70 plus years it has morphed into a political tool for anti-Israel and Anti-Americans nation groups.

In addition, they have adopted progressive ideas on “climate change’, homosexuality, wealth inequality, and now gender equality, but not for men as they are blaming all the faults of world history on men, who have been primarily been governing the world. 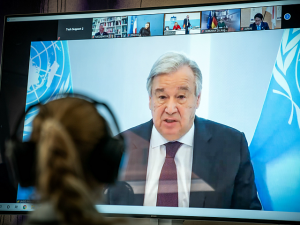 So how do criticizing men, because of gender, and blame them for everything that is the wrong, as a collective instead of the individual?

Where is the promoting and encouraging respect for human rights and for fundamental freedoms for all without distinction as to race, sex, language, or religion?

Doesn’t the idea of promoting women, because of their gender alone, anti-male at its core.

Doesn’t assigning a preference to women, take away opportunities from young boys and men around the world who are entitled to equal treatment under their directives?

And just how deludedly, monstrously arrogant would you have to be to declare that you know better how to order society and run the world — in a non-patriarchal way, apparently — than pretty much every civilization in the entirety of human history?

Current Secretary-General António Guterres — the pillock responsible for those outrageous statements about men — is typical of the kind of pond-life it attracts and promotes.

The #COVID19 pandemic is demonstrating what we all know: millennia of patriarchy have resulted in a male-dominated world with a male-dominated culture which damages everyone – women, men, girls & boys.

No, really. According to the United Nations, the “millennia of patriarchy” which gave us, among many other things, the Greek and Roman philosophers, Christianity, the Taj Mahal, Habeas Corpus, the art of the Renaissance, the collected works of Shakespeare and Goethe, Johann Sebastian Bach, penicillin, central heating, air conditioning, the internal combustion engine, and space travel, have actually been damaging to “everyone”.

Also, according to the UN, “we all” know this.

Who exactly is this “we”, Kemo Sabe?

Here is another nice thing to promote, the UN shared the ANTIFA flag, telling the USA that the domestic terrorist group, ANTIFA, has the right of ‘Freedom of Expression’ to ‘Peaceful Assembly’.

How do like that? The Marxist UN tried to tell our government they should define ANTIF’s actions as a “peaceful assembly”, and thus entitled to the 1A rights in the Constitution?

While the UN has long been a deeply suspect institution, it has not until now been quite so overt in pushing its hard-left, tyrannical, One World Government agenda of revolutionary change.

That latest tweet screams one message loud and clear: defund the United Nations; have nothing more to do with it; raze every one of its buildings to the ground; sack all its staff; consign it to the dustbin of history.

I for one am asking President Trump to give our one year notice of exiting the United Nations, as they are only “United” against Nationalism, the USA, and Israel.

In addition, give them notice that their leases are ending, and ask them to relocate, out of our country, ASAP.