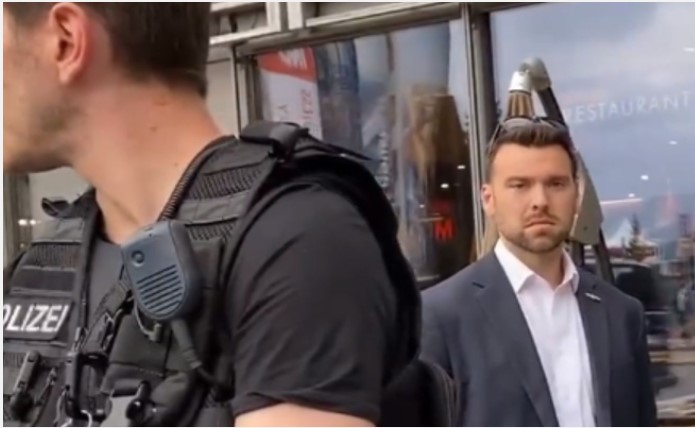 In my humble opinion, the most dangerous organization on Earth, for anyone who chooses liberty over tyranny, started its annual conference on Mondy in Devos, Switzerland. Those invited to attend included Prince Charles, John Kerry, and Al Gore.

Volodymyr Zelenskyy, the President of the corrupt nation of Ukraine, spoke at the New World Order conference. He was interviewed by the devious mastermind of the deconstruction of nations around the world, WEF Founder Klaus Schwab.

The World Economic Forum, which started the year the U.S. Dollar was taken off the gold standard, in 1971, has been increasing its influence by adding the wealthiest, most powerful individuals including politicians, and corporations in the world to its list of those agreeing to deconstruct capitalism worldwide.

This year’s World Economic Forum’s Davos event is expected to draw large crowds with over 2,500 elitists expected to attend.

Human Events Daily decided to attend to give a report on the activists in and around the conference.

The host Jack Posobiec was detained in Davos, Switzerland on Monday, on day one of the World Economic Forum’s annual convention.

Police reportedly refused to tell Posobiec and his crew why they were being detained, though he later told The Post Millennial that he was told that they looked “suspicious” because they were filming at the entrance.

Posobiec shared his experiences of being detained during a live interview with Charlie Kirk.

Posobiec says that he had shown police his passports and press badge an hour prior. During an appearance on the Charlie Kirk Show, Posobiec said that he was asked by authorities who Turning Point USA was, and why they were in Davos.

He says that authorities asked him to turn over the video and tried to separate him from his crew.

“Never once did they explain to us why we were targeted. I want to be clear on something, we had already given our name, our passport, and our press pass, about an hour prior,” said Posobiec who then speculated that authorities had independently looked him and his team up after showing them their info.

We just got DETAINED at Davos by WEF Police https://t.co/C4gz5UFWUE

So, this police have the ability if they want to, to confiscate things from us… confiscate our cards, start deleting things, and before we can even get legal involved, they could have taken down all of the footage that we’ve already filmed today for this project… this docuseries to go along with the book that’s coming out that’s called ‘The Great Global Reset.

Posobiec signed off from his appearance by giving a direct message to WEF chairman Klaus Schwab, saying: “Mr. Schwab, we’re not going anywhere.”

The journalist and crew were released after independent reporter Savanah Hernandez showed up and began filming about an hour into their detention, reports Timcast.

Keep up the good fight @JackPosobiec
You are dealing with the Great Reset https://t.co/RTB9ZZapqa

Will @JoeBiden and The @WhiteHouse condemn this? https://t.co/O2Ayq7cbh8

The WEF in coordination with the WHO, UN, and Blackrock financial, are fully engaged in attacking the core fundamentals of the United States along with a few other nations who are standing in the way of global governance.

The year 2030 is their first main benchmark for The WEF & UN.

We The People of the United States will have a good idea at that time if we will remain free or if our leaders had already given the keys to our former Constitutional Republic away to them?

As for me and my family will continue to fight for liberty and will be praying that more Americans wake up, before we own nothing, and are supposed to be happy about it.