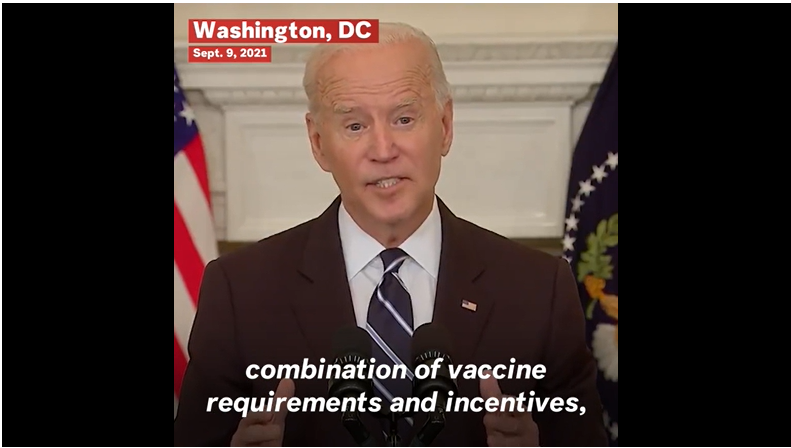 Well, here we go America. Our massive federal government, acting as a tyrannically lead collective enforcement agency for progressives, sent out their senile leader demanding Americans aqueous to their demands, giving up their individualism.

He noted the “vast majority” of Americans were “doing the right thing” by getting vaccinated, but that he would make life more difficult for the unvaccinated. “We cannot allow these actions to stand in the way of protecting the large majority of Americans who’ve done their part and want to get back to life as normal,”

Biden then pushed the narrative that the coronavirus pandemic was not going away, despite the government’s best efforts to fight it. “We’re in the tough stretch and it could last for a while,” he said.

What is unnerving for many is Biden once again went back on his previous positions and statements.

A video from late in 2020 shows President-elect Joe Biden saying that he wouldn’t make vaccination against COVID-19 mandatory, a position he just reversed on Thursday.

Footage shows Biden saying he would not impose a mandate in response to a reporter’s question on 4 December 2020.

Basement Joe was not the only political leader confirming the government can’t mandate citizens to take a vaccine.

In April, Pelosi told reporters that the House could not require members to be vaccinated and that knowing who had received the shot was a “matter of privacy.”

Video of Pelosi’s remarks had been viewed on Twitter more than 470,000 times at the time of writing.

Throwback to when Pelosi said “we cannot require someone to be vaccinated” and “it’s a matter of privacy to know who is and who isn’t [vaccinated]” pic.twitter.com/SDhmptGOX9

In line with his response to the resistance to gun control, spending bills, and now COVID, President Joe Biden angrily ordered the federal government to move forward with possibly unconstitutional actions. This time ordering widespread vaccination mandates on Thursday, demanding that private businesses mandate vaccinations for their employees.

“This is not about freedom or personal choice,” Biden said during a speech from the White House. “It’s about protecting yourself and those around you.”

Biden put on his “tough guy” persona against unvaccinated Americans, scolding them for refusing the vaccine.

“We’ve been patient, but our patience is wearing thin,” he said. “Many of us are frustrated with the 80 million Americans who are not vaccinated,”

The plan released by the White House noted the Department of Labor’s Occupational Safety and Health Administration (OSHA) would develop a rule requiring all private companies with 100 or more employees to make sure their employees were fully vaccinated or produce weekly negative test results.

He warned state governors who threatened to oppose his more draconian mandates that he would use his executive powers to enforce them. “If these governors won’t help us beat the pandemic, I’ll use my powers as president to get them out of the way,” he said.

The Supreme Court will eventually have to make a ruling on what the federal government can requires, but as for me, Biden’s plan is unconstitutional.

Snowflakes At The National Archives Slaps ‘Harmful Content’ Warning On US Constitution!
Taliban Responds To Global Woke Leftists: “Women Can’t be Ministers – They Should Give Birth”