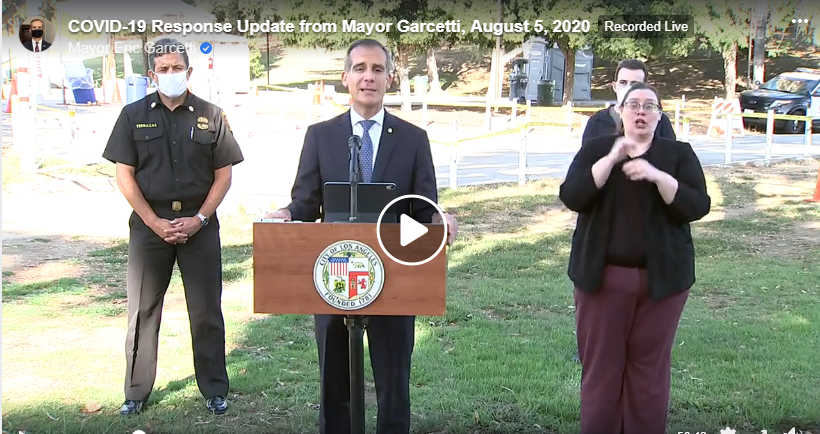 LA will not let the “virus” panic go away.

With over 10.o4 million Angelinos in LA country, 4,758 people have died with CV-19, not necessarily because of it.

In spite of the low numbers, the tyrannical mayor’s office has decided to go after groups of people meeting, including churches, and announced today the LA utility company, DWP, will be shutting off the water, power for reported large house parties.

Mayor Eric Garcetti says he is authorizing the Los Angeles Department of Water and Power to shut off utility service to properties where large parties and gatherings are held.

It wasn’t clear whether Garcetti’s announcement was related to that motion.

Under the proposal, penalties for large gatherings could include water and power shutoff, permit prohibitions or having a certificate of occupancy held or revoked for any “large, close-contact, largely maskless gatherings, in direct violation of City Emergency Orders and County Health Orders”.

“Despite a pandemic that has killed thousands in Los Angeles, some homeowners are choosing to put everyone at risk by renting out their homes to massive house parties,” Ryu said. “This is irresponsible bordering on deadly, and it must be stopped.

“Whether it takes shutting off utilities or revoking their permits, we must do what it takes to shut these party houses down.”

Dozens of people seen at a party being thrown at a Mulholland Drive mansion in Beverly Crest on Aug. 3, 2020, hours before a shooting occurred at the party. (CBSLA)

The proposal comes days after a large house party in the Beverly Crest neighborhood of Los Angeles ended in a shooting that left one woman dead and two others hospitalized.

Police later said the killing was believed to be gang-related.

Any large and unruly gathering “which threatens or interferes with the public health, safety or welfare” is prohibited under the city’s party house ordinance.

That law includes increasing fines on both the party host and homeowner, as well as possible misdemeanor charges for repeat offenders.

Anyone who cares about Liberty needs to get out of LA. I for one are planning our escape from the Central Valley in California to Arizona. Leftists know how to destroy things, and don’t know how to fix them after they have. We know the city, country, and state will eventually go BK, it’s just a matter of time.