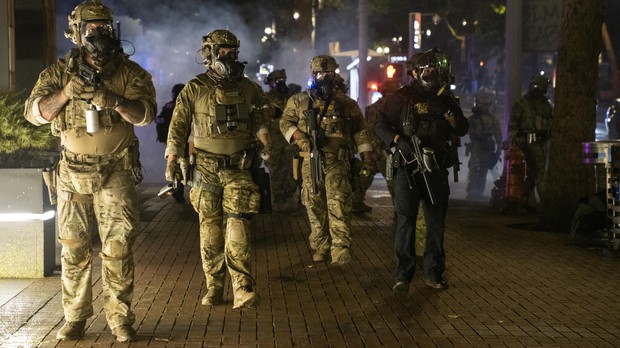 President Trump has had his hands full with more issues that one can count on 2 hands. Pandemic, re-opening the country, and domestic violence “protests” have been leading the liberal news cycles.  Portland, Oregan, a city that was already in decline, decided to not resist growing protest, violence against the police and citizens, and stop damage to personal property.

In light of all the violence, President Trump starting tweeting and making public comments, giving notice to the Mayor and city council of Portland, that if they did not get their city under control, he would do something about it.

Protesters have, for weeks, targeted authorities in Portland, hurling rocks, water bottles, and commercial-grade fireworks their way night by night. Businesses in downtown Portland alone have lost $23 million as the criminal activity has dominated the streets — an activity that continued Thursday night into early Friday morning. 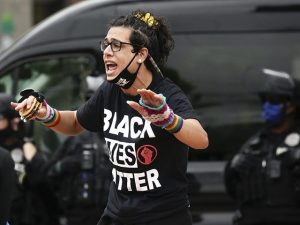 It appears, by President Trump’s directive, federal law enforcement officials are done letting domestic terrorists rule over a major US city. The officers moved in to quell sustained Antifa violence in Portland, Oregon, and are reportedly detaining protesters in unmarked police vehicles.

According to Oregon Public Broadcasting (OPB)

Personal accounts and multiple videos posted online show the officers driving up to people, detaining individuals with no explanation of why they are being arrested, and driving off.

The tactic appears to be another escalation in federal force deployed on Portland city streets, as federal officials and President Donald Trump have said they plan to “quell” nightly protests outside the federal courthouse and Multnomah County Justice Center that have lasted for more than six weeks.

“What is going on? Who are you?” one woman asks in a video showing two officers in camo escorting an individual to an unmarked vehicle.

“You just violated their rights,” one witness said as another accused them of “kidnapping people.” The reports sparked outrage from many on social media, some of whom described the action as “state terror.”

"Federal officers using unmarked vehicles to drive around downtown Portland and detain protesters… officers driving up to people, detaining individuals with no explanation of why they are being arrested, and driving off."https://t.co/R70YPdz8Qw

These federal officers (?) just rushed up and arrested someone for no reason pic.twitter.com/xcFVuoMZmN

“Grabbing peaceful protesters off the streets of Portland and putting them in unmarked cars to detain them is unconscionable and terrifying. It is not de-escalation, it is not the Oregon way, and it must stop,” Rep. Suzanne Bonamici (D-OR) said in response to the reports, demanding the Trump administration to “answer for what they have done and end the militarization of our streets immediately”:

Grabbing peaceful protesters off the streets of Portland and putting them in unmarked cars to detain them is unconscionable and terrifying. It is not de-escalation, it is not the Oregon way, and it must stop.https://t.co/fg5tg9573h

President Trump gave Portland ample time to restore law and order in their city, they did not, so to protect the non-violent US citizens from domestic terrorism, the federal police came in quietly and professionally to take care of business.

Of course, Rep. Suzanne Bonamici (D-OR) would be upset, she just got overridden by the Federal government and her loony constituents can’t be happy about it. Thank you, President Trump, and thank you Federal Law Enforcement.