Unlike Democrats who vote in unison trying to advance their agenda items, Republicans are divided with a growing number of their members moving to the center and voting with the Democrats more frequently.

Voters who could see the US moving quickly towards Marxism voted for former President Donald Trump in the 2016 election.

Trump appeared to be caught off guard by the intelligence agencies’ pre-inauguration witch hunt and within a few short months of taking office had lost a confidant in Michael Flynn who was forced to resign by the swamp. The next 4 years turned into political combat preventing the leader of the MAGA movement from passing a majority of his agenda.

One of the areas Trump excelled at was the economy leaving most political pundits expecting him to win re-election in 2020.

Globalists though were not going to just stand by and let President Trump continue his march towards decoupling the US from globalism.

The Johns Hopkins Center for Health Security in partnership with the World Economic Forum and the Bill and Melinda Gates Foundation hosted Event 201, a high-level pandemic exercise on October 18, 2019, in New York, NY. The exercise illustrated areas where public/private partnerships will be necessary during the response to a severe pandemic in order to diminish large-scale economic and societal consequences.

The World Economic Forum which put forth The Great Reset, followed up with a video in March 2020 confirming their involvement in researching the possible ramifications of a global pandemic.

“We ran a massive viral pandemic simulation. Here’s what we learned about managing Coronavirus.”

President Trump after conferring with “experts”, including Dr. Anthonly Fauci,  announced on Mar 16, 2020, he was declaring a national emergency, calling for 15 days to stop the spread.

The problem is after 15 days, the number of cases exploded allowing the left to use COVID-19 to force a change in the way Americans vote. Using targeted lawsuits, election attorneys for the DNC were able to get universal mail-in ballots approved in swing states, overriding election laws passed by their state legislatures.

The massive number of unsolicited mail-in ballots sent out in the swing states caused havoc in the 2020 elections, leading to Joe Biden being credited with a record-breaking 81 million votes.

As the dust settles from the 2022 midterm elections, President Trump took to his social media platform, Trush Social, to slam the Republican establishment which is blaming him for the Republican Party’s disappointing midterm performance.

According to the former president, Democrats, RINOs, and the mainstream media fail to acknowledge that his midterm endorsees saw overwhelming success in November, noting that without his help, “the numbers would have been a disaster.”

“I was 232-22 in the MIDTERM ELECTIONS, and still have to listen to DEMS, RINOS, and the Fake News explain how poorly I did (Also, 98.6% in Republican Nomination Endorsements!),” President Trump wrote. 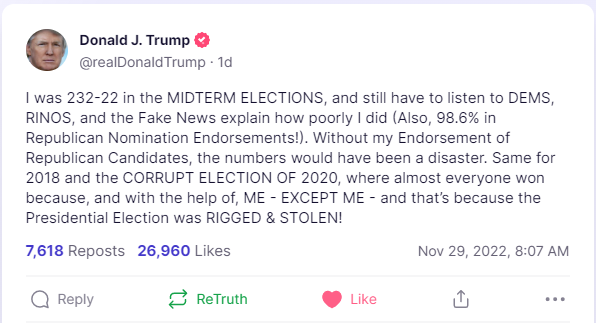 “Without my Endorsement of Republican Candidates, the numbers would have been a disaster. Same for 2018 and the CORRUPT ELECTION OF 2020, where almost everyone won because, and with the help of, ME – EXCEPT ME – and that’s because the Presidential Election was RIGGED & STOLEN!” he added.

In another post, Trump stressed that American election integrity will always be questionable so long as states continue to allow the widespread use of controversial and arguably fraud-prone mail-in ballots.

In a separate post, the former president drew attention to a video from Maricopa County’s election certification hearing in which a Phoenix voter discussed her grievances with widespread election issues that took place on Election Day and in previous elections.

“This is a MUST WATCH. Our Elections are Rigged. Mail-In Ballots are a total SCAM. How about all of those ‘BROKEN’ Republican Voting Machine? GET SMART REPUBLICANS, OR YOU WON’T HAVE A PARTY (OR COUNTRY) LEFT!” President Trump wrote.