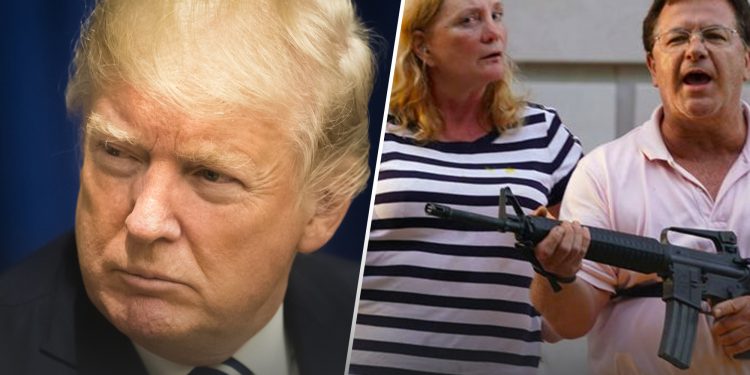 President Trump told Missouri Governor Mike Parsons “that he would do everything he could within his powers to help with this situation.”

President Donald Trump may intervene on behalf of a St. Louis couple who made headlines after brandishing firearms in defense of their home while rioters taunted them.

Mike and Patricia McCloskey were videotaped the evening of June 28th wielding firearms after they say people from a passing protest damaged their fence while trying to trespass onto the property. No shots were fired nor was any use of force applied. Since the events unfolded in June, the couple has come under legal attack, having one of the firearms, an AR15-style rifle, confiscated by police.

Missouri Governor Mike Parsons told reporters that he spoke with President Trump about the issue on Tuesday, July 14th, saying, “He understands the situation in St. Louis and how out of control it is for a prosecutor to let violent criminals off and not do their job and try to attack law-abiding citizens…”

Parsons continued to say that Trump “said that he would do everything he could within his powers to help with this situation.”

Garnder refers to him as “Donald Trump” and “one of the most divisive leaders in our generation.” Mind you she uses this vindictive vernacular after saying that the President and Governor are “playing politics.”

1/ Today, both the Governor and Donald Trump came after me for doing my job and investigating a case. While they continue to play politics with the handling of this matter, spreading misinformation and distorting the truth, I refuse to do so. (Full statement below) pic.twitter.com/9T5RdvFSOI

Attorney for the McCloskey’s, Harmeet Dhillon, addressed the seizure of their seasons as an “overreach” on behalf of the local government.

Missouri is a Castle Doctrine state, permitted among the broadest latitudes of any state in using even deadly force to protect yourself or your property. This couple used NO force, despite the imminent threat from a trespassing mob. The seizure of weapons is government overreach. https://t.co/CZI3w3GhpE

The McCloskey’s told Sean Hannity that they were fearful for their lives when the mob advanced them.

This event was one of the many cases where “peaceful protests” were conducted with a small rogue group being violent and destructive.

According to Mike McCloskey, the majority of the mob was non-violent or intimidating but then some of the group vandalized his gate while trying to gain access to his property. That is when he and his wife, Patricia, grabbed their guns.