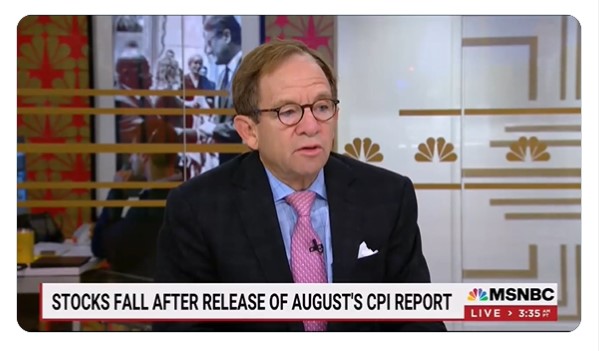 If case there was any doubt concerning the Biden administration’s inability to handle the 40-year high inflation affecting Americans nationwide, the past few weeks should have put the debate to rest.

On Tuesday, the Bureau of Labor Statistics published the consumer price index for August, showing a 0.1% inflation increase from July, a worrying sign, especially amid dropping gas prices. The figures showed inflation grew 8.3% year over year.

The increase was reported shortly before Biden held a celebration of the passage of the Inflation Reduction Act.

On Wednesday, market analyst Steve Rattner, who served in the Obama administration, gave more bad information to those who are looking for relief.

He predicted that the inflation crisis will likely end with a “hard landing.”

The economist said a sudden period of an economic downturn often results in a recession.

Speaking on MSNBC’s “Morning Joe,” Rattner warned the trajectory of the inflation crisis is more economic pain for Americans.

“What yesterday’s numbers did was increased the probability of what we’re calling a hard landing — that there’s going to have to be a recession to get inflation down anywhere near the Fed’s 2% target,” Rattner said.

“When households and businesses can reasonably expect inflation to remain low and stable, they are able to make sound decisions regarding saving, borrowing, and investment, which contributes to a well-functioning economy,” the Fed explains.

Typically, when the inflation rate is significantly greater or lower than 2%, the Fed takes action.

In the case of the current crisis, the Fed has been aggressively raising benchmark interest rates to slow down, colling off, the overheated economy.

The reason for the cool-off is as interest rates go up, economic activity drops accordingly due to the higher interest rates for business, auto, and home loans.

Federal Reserve Chairman Jerome Powell has acknowledged that a recession is “certainly a possibility” as the Fed continues to hike interest rates.