The larger the population, the more unrest in them. Chicago, LA, Baltimore, Minneapolis, and America’s largest, New York City. As reported all over the news, Mayor Bill De Blasio, who is severely mismanaging their virus response, has also been destroying the NYPD through more restrictions, closing divisions, and pulling $1 Billion from their annual budget.

The criminals in town also watch the news. They know the plan clothes officers are not around, the police can’t fight back, unless 100 percent sure they might die, and the police force is demoralized and not going to respond to most calls. In addition, thousands of criminals have been released do to the CV-19 concerns. There are a lot of unruly BLM, ANTIFA and everyday criminals out looking for trouble and greatly outnumbering the demoralized officers they encounter.

On Wednesday, Three NYPD officers were violently attacked by Black Lives Matter militants. The BLM terrorists were crossing the Brooklyn Bridge when they clubbed three police officers with a weapon.

This is not peaceful protest, this will not be tolerated. pic.twitter.com/cYuDX8G7ku

Additional footage of the serious injuries our officers sustained on the Brooklyn Bridge. pic.twitter.com/Ja9lTpQu0G

There were 15 shootings in a 15 hour period last weekend in New York City.

Murder and shootings are soaring this year compared to last year.

And Bill de Blasio and his city officials just voted to cut the police budget by one billion dollars or around the same amount of cash that Bill de Blasio’s wife lost in one of her special projects.

One NYPD officer was put in a choke hold last weekend while locals stood around and cheered!

Without law and order, will the entire island of Manhattan get converted into a giant maximum security prison, like in the movie, Escape From New York? 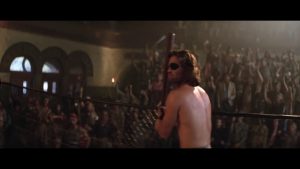 Or even worse, will it turn into Gotham City? 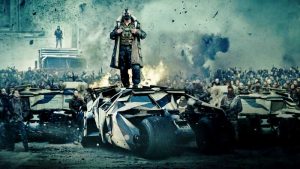 You can see my point unless Law and Order are restored to NYC, is worse days are ahead of it. You can expect them to come running for handouts and assistance, just like they did during the pandemic. I don’t need to escape from New York, and will not be returning, the risks not outway the benefits.