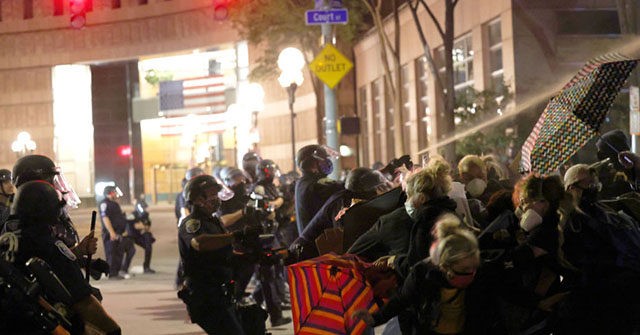 Last night there was a coordinated attack on multiple democratic controlled cities, which if it continues to spread, should require a strong response from the White House to get law and order restored.

There has been rioting in Portland and Seattle for months, and now it has spread to New York City, Philadelphia, Louisville, Denver, etc.

What was seen as an opportunity for Democrats to push the narrative that people spontaneously starting hitting the streets to protest, to address what they believe is “Systemic racism” in America especially in the police and judicial systems.

Where this plan has backfired is the anarchists running Black Lives Matter and ANTIFA, don’t care about any of the political parties, as they want to burn down the entire American system.

The Biden team, who has been supporting these “peaceful protests”, found out in their polling that Americans are against lawless rioting, and starting moving to President Trump for safety.

What does this all mean?

The left miscalculated ANTIFA and BLM’s objectives and this is costing them votes, these domestic terrorist groups feel empowered to increase their rioting, and since none of the progressive run cities they are attacking are pushing back, they are spreading.

Via The Gateway Pundit

The Democrat shock troops were back out in the streets on Friday causing mayhem and spreading terror in cities across America.

In Rochester and Denver, the BLM mobs stormed restaurants and harassed diners on Friday night.

The BLM mob in Rochester climbed homes and tried to break into apartment buildings.

The mob also wants all police precincts burned to the ground.

#PhillyProtest chanting "Every city every town burn the precincts to the ground" https://t.co/VgStiAxQXA

More @JoeBiden voters destroying our society after being emboldened by @TheDemocrats the leftist media. At this point it’s more than fair to say that whatever oppression these people THINK they’ve endured now pales in comparison to what they’ve done to others. https://t.co/1sFNffMoBm

Wow, I would hate to live in one of these cities, and if Joe Biden was to become the 46th President, these scenes would become more common, and in more cities, as they march on towards tyranny.

The elections on November 3rd will decide if America wants to restore law and order under President Trump or abandon it under a Biden presidency.

Two completely different visions for America, time will tell who wanted it more. See you at the polls.