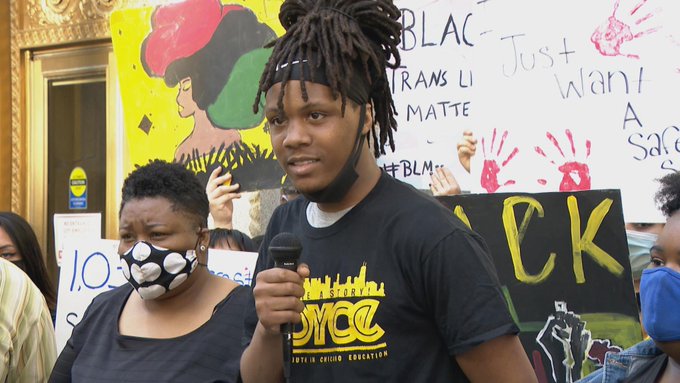 Insanity, some define as; “Doing the same thing over and over again yet expecting different results.”

Caleb Reed, a 17-year-old, activist who rallied to defund the Chicago police and remove them from their schools was shot dead on Friday.

No suspect has been named in Reed’s death at the time of this reporting.

The young activist spoke out against the police.

This is Caleb Reed, a Freedom Fighter, speaking at a press conference in early June demanding #CopsOutCPS.

Such a beautiful soul. Rest in peace. pic.twitter.com/3JJWRP6uVq

Caleb Reed, a 17-year-old student activist from Mather High School in Chicago, was found shot in the head on Friday.

Reed, described by the Chicago Sun-Times as a “student leader with a youth activist group,” was discovered on a sidewalk of the West Rogers Park neighborhood in the city.

The teen, a leader with student group Voices of Youth in Chicago Education, was an advocate of removing police from Chicago schools.

Just weeks ago, Reed spoke at a board of education meeting in support of removing police from the district. During the meeting, he recalled his own experience with officers in his school.

During the meeting, Reed said, “My sophomore year of high school I was arrested for attending a basketball game because I didn’t have my ID. I sat in a police station for six hours. I knew it wasn’t right at all, but inside I was angry, confused.

“One thing I’m here to say is I’m proud to be a black young man,” the teen activist added. “It’s not a good feeling to be labeled as dangerous or criminals. Because we’re not. … No black person should ever feel like this.”

In a statement, Alderman Andre Vasquez said, “Caleb was a son, a brother, a community organizer, and a neighbor. His light and potential have been extinguished at the hands of gun violence, like so many brothers in Chicago. As a city, we need to address the root causes of this violence, which is the segregation and disinvestment in the communities that need it the most for generations now.”

On Twitter, Vasquez added, “Caleb lived and was shot in our ward this weekend. He was a light in our community that was extinguished too soon. We need to address the root causes of #GunViolence so that we stop losing our people. I ask that people help continue the work he was doing and pray for the family.”

Caleb lived and was shot in our ward this weekend. He was a light in our community that was extinguished too soon. We need to address the root causes of #GunViolence so that we stop losing our people. I ask that people help continue the work he was doing and pray for the family. https://t.co/WFWv9DXY2Z

Another sad day in Chicago as black youth continue to get killed, and to make it worse, at the same time, some of them like Caleb, are asking for the police to leave their streets and schools.

This movement to defund and remove police from cities with high crime and murder rates is illogical and if allowed to go through will be devastating to every community involved.