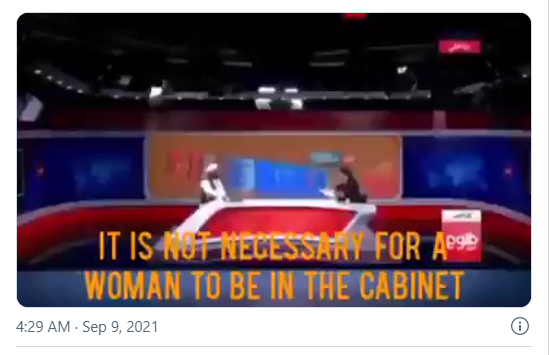 Earlier this week the Taliban announced the ministers for their new government.

When in power from 1996 to 2001, the Taliban enforced the most extreme of interpretations, barring women from education and work and even from leaving home without a male escort, and requiring them to cover themselves from head to toe in public.

The Biden team dreams of a culturally and religious world that doesn’t exist thus clueless.

Biden’s Secretary of State Tony Blinken was shocked that the Taliban’s list for their new government did not include any women or former government officials.

The woke Biden officials have stressed to the Taliban the need for an inclusive government.  The Taliban thought otherwise and filled the positions with an elite team of Taliban terrorists.

"The announced list of names consists exclusively of individuals who are members of the Taliban or their close associates and no women" https://t.co/ONdacbEESa pic.twitter.com/0lGSfF5LLX

TRENDING: Tyrant Biden Orders Vaccine Mandates: ‘This Is Not About Freedom or Personal Choice’

On Friday the Taliban responded to Biden and Blinken on the need for inclusivity in their new government.

Taliban spokesman: “A woman can’t be a minister, it is like you put something on her neck that she can’t carry. It is not necessary for a woman to be in the cabinet, they should give birth.”

A Taliban spokesman on @TOLOnews: "A woman can't be a minister, it is like you put something on her neck that she can't carry. It is not necessary for a woman to be in the cabinet, they should give birth & women protesters can't represent all women in AFG."
Video with subtitles👇 pic.twitter.com/CFe4MokOk0

I don’t expect any women to have influence in Afghanistan moving forward, leading to the Biden administration distancing themselves even farther away from this fundamentalist Sharia Islamic nation.

Tyrant Biden Orders Vaccine Mandates: ‘This Is Not About Freedom or Personal Choice’
Biden’s Policies Cost Everyone $$$. Producer Prices Soar a Record 8.3%
To Top