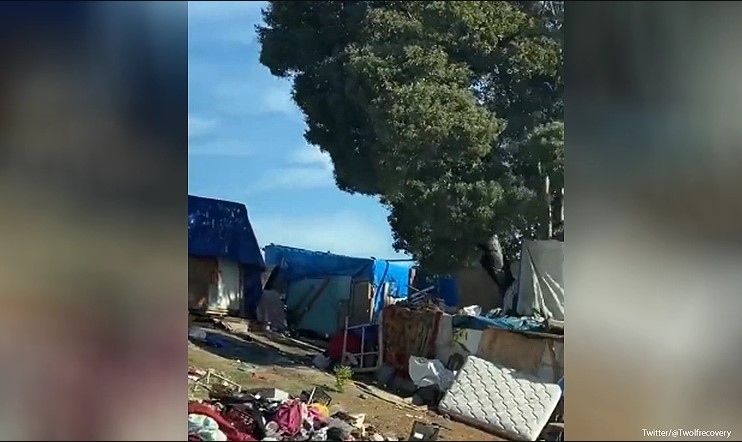 In what was considered a crisis primarily in Los Angeles and San Franciso, is now a problem in all the large metro areas throughout the Golden state.

As someone who lives outside of Fresno, the ever-increasing number of homeless panhandlers and tent cities popping up around the sprawling metro area is alarming.

Susan Sarandon is drawing attention to the homelessness crisis in California.

The actress and progressive political activist shared a TikTok video of a large encampment with her massive number of followers on Twitter on Oct. 17.

The footage shows a collection of tents, dilapidated wooden structures, clothes, and discarded furniture along a street in Oakland.

The Oscar-winning actress didn’t caption the video but added a credit noting the footage came from homeless activist Thomas Wolf.

Wolf, who describes himself as formerly homeless and a native San Franciscan, originally uploaded the video to Twitter on Oct. 13.

He captioned his post: “This isn’t a shanty town in India. This is Oakland, CA. The crisis of our generation.”

After several Twitter users asked where the footage was recorded, he replied: “12th St. in Oakland near the freeway.”

There are currently over 173,800 unhoused residents in California, according to a newly published survey by CalMatters, a nonpartisan and nonprofit news organization in the state.

In August, Gov. Gavin Newsom announced the state had cleared 1,262 encampments over the past year and removed 1,213 tons of trash –- “enough to fill 22 Olympic-size swimming pools.”

“Leaving people on the streets and our highways is dangerous and inhumane. It’s unacceptable,” Newsom said in a statement.

“California is investing billions of dollars to house thousands of people and clean up our communities and streets,” he added. “Our efforts are a model for the nation, and more importantly, we’re getting people off the streets and into the housing and services they deserve.”