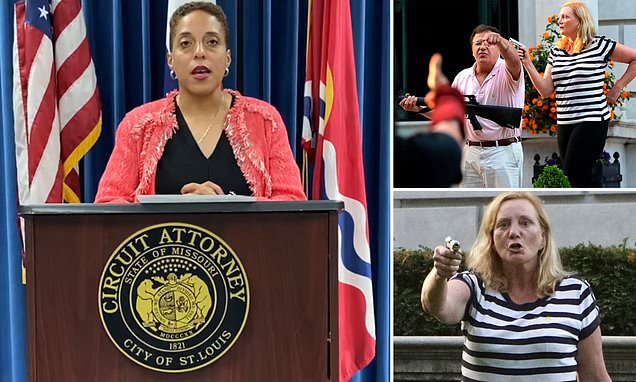 Do you ever wonder, where are the “good guys’ taking a stand on principle?

You know, a William Wallace or William Wilberforce fighting for a purpose.

As the saying goes; “The only thing necessary for the triumph of evil is for good men to do nothing.”

One of many verses from God’s Word echoes the need for action; Proverbs 24:   If you do nothing in a difficult time, your strength is limited. Rescue those being taken off to death, and save those stumbling toward slaughter.

The reality is that those who do take a stand in 2020, might be fired from their job, doxxed online sending ANTIFA nuts to their homes for intimidation, or straight forward social media character assassination, etc.

The case has attracted national attention since photos and video of the couple pointing guns at trespassing protesters went viral.

In addition, police contend at least one person in the crowd was armed and another was wearing a bullet-resistant vest, after analyzing videos taken June 28, when the couple confronted protesters with guns.

Some of the phrases he was able to decipher from the footage collected by prosecutors from protesters included:

“You own a business. Your business is gone.”

“We coming back baby.”

“You ain’t the only (expletive) with a gun.”

“They coming back to your house.”

Critics – nearly all Republicans – have said Circuit Attorney Kim Gardner should not charge Mark and Patricia McCloskey because the state’s Castle Doctrine and stand-your-ground laws allow them to defend their property against perceived threats.

The documents obtained by 5 On Your Side include an email Gardner’s Assistant Circuit Attorney Chris Hinckley sent to the lead investigator on the case, Sgt. Curtis Burgdorf. Hinckley emailed police the day before the McCloskeys were served with a search warrant, stating it needed to happen “now.”

Sgt. Burgdorf outlined 14 concerns he had about the document, saying Gardner’s interpretation of the law is wrong.

In the end, they executed the warrant, took the McCloskey’s weapons, and are planning on moving forward with a case against them.

The good news is another person of principle is getting involved post warrant.

“Republican Attorney General Eric Schmitt is intervening in state Circuit Attorney Kim Gardner’s legal action against Mark and Patricia McCloskey, for brandishing a rifle.  The McCloskeys took up arms when extreme ‘anarchist’ demonstrators gathered outside their home on June 28. The weapon was confiscated after the St. Louis Metropolitan Police Department searched the property. “

STL prosecutor Kim Gardner is engaged in a political prosecution

As AG I’m entering the case seeking a dismissal & defend all Missourians’ right to protect their lives/property pic.twitter.com/kQLXOAhFIz

What a crazy story, but not shocking as the left is determined to strip away our 2A rights, one judicial overreach at a time, hoping to eventually get a Supreme Court who will re-write the Constitution through judicial activism.

Just announced, in spite of her outrageous actions, Circuit Attorney Kim Gardner won her primary last night and is expected to be re-elected in November.

Elections matter, just look at the cities with conservative leadership compared to those with progressive, the data, and quality of life says it all.