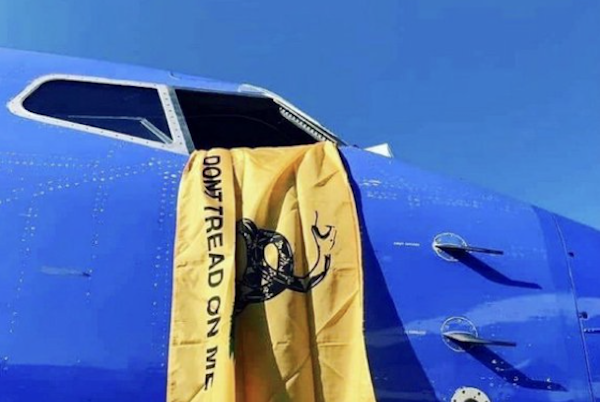 The White House and corporate America have come to find out a few things the hard way.

One glaring example is the public protest from Americas who love liberty and are willing to give up everything, in protest, to the threat of losing their Constitutional rights.

Southwest Airlines in response to requests from the Biden White House, sent an edict to their workers demanding they take the COVID-19 vaccine or lose their income.

Even though the company and their employees’ labor union vehemently deny that a large number of employees called in sick in protest, a big U-turn was just announced following thousands of flight cancellations last week.

Southwest has decided it will not place unvaccinated workers on unpaid leave after the December 8 deadline after all.

In addition to the huge amount of flights canceled after pilots and employees boycotted the company’s vaccine mandate, the pilots decided to bring legal action.

“The new vaccine mandate unlawfully imposes new conditions of employment and the new policy threatens termination of any pilot not fully vaccinated by December 8, 2021,” the legal filing said. “Southwest Airlines’ additional new and unilateral modification of the parties’ collective bargaining agreement is in clear violation of the RLA.”

This photo was just sent to me of a grounded Southwest plane flying a Gadsden flag out of the cockpit. The Hero Pilots at Southwest and other Airlines deserve our support. True patriots worthy of the American Freedom Fighter tradition.
Don’t Tread On Me.
God Bless Them 🇺🇸✈️🙏🏻 pic.twitter.com/tAo9pT4Q60

Southwest changed direction just one day after its employees gathered outside of the airline’s headquarters in Dallas to protest the company’s vaccine mandate.

Southwest Airlines has scrapped a plan to put unvaccinated employees who have applied for but haven’t received a religious or medical exemption on unpaid leave starting by a federal deadline in December.

Southwest’s senior vice president of operations and hospitality, Steve Goldberg, and Julie Weber, vice president and chief people officer, wrote to staff on Friday that if employees’ requests for an exemption haven’t been approved by Dec. 8, they could continue to work while following mask and distancing guidelines until the request has been reviewed.

The company is giving employees until Nov. 24 to finish their vaccinations or apply for an exemption. It will continue paying them while the company reviews their requests, and said it will allow those who are rejected to continue working “as we coordinate with them on meeting the requirements (vaccine or valid accommodation).”

“This is a change from what was previously communicated. Initially, we communicated that these Employees would be put on unpaid leave and that is no longer the case,” they wrote in the note, which was reviewed by CNBC.

Southwest confirmed the policy change, which comes just weeks before the deadline.

Congratulations to all the Southwest Airlines employees who took a stand, and won.

You and thousands of other hard-working Americans, from various professions, are reminding employers this is still the land of the free and home of the brave.

Come On Man! Basement Joe Has Not Held A Press Conference In 96 Days
Pundit Predicts Trump Will ‘Ultimately’ Run in 2024, But Not Against Biden