The Sunshine state of Florida has been the number one relocation destination for Americans looking to move to a state resembling the United States many of us grew up in.

Life, liberty, the ability to buy a home at an affordable price, etc.

What is not reported that often is the reality that there are a lot of sharks in the warmer ocean waters around Florida, and sometimes they bite.

Yes, I know the odds of getting bitten by a shark are low, but for those who do, it’s 100 percent and very painful, even deadly at times.

On Saturday, beach attendees received more of an adrenaline rush they had bargained for.

“Get out the water!” someone screamed in the footage shared on Instagram by Kara Skonieczny. The video shows a shark fin swimming in a circle before being met by a second fin protruding from the water.

🦈TOO CLOSE FOR COMFORT🦈

My sorority sister @karaskonieczny took this video from Neptune Beach on Pine Street! 2 sharks way too close to the shore. Please be careful.

There has also been a man reportedly bitten by a shark @ Jacksonville Beach today. More on Action News Jax @ 6 pic.twitter.com/VH4T0SAcnI

On the same day, witnesses told reporters that a man was bitten by a shark at Jacksonville Beach.

A man was reportedly bitten by a shark at Jacksonville Beach on Saturday afternoon, a witness told First Coast News.

Nadya Hicks, 16, was surfing near 12th Avenue South when she heard screams from about 30 feet away. Hicks said she swam over to the man in distress and gave him her surfboard to help him get to shore. 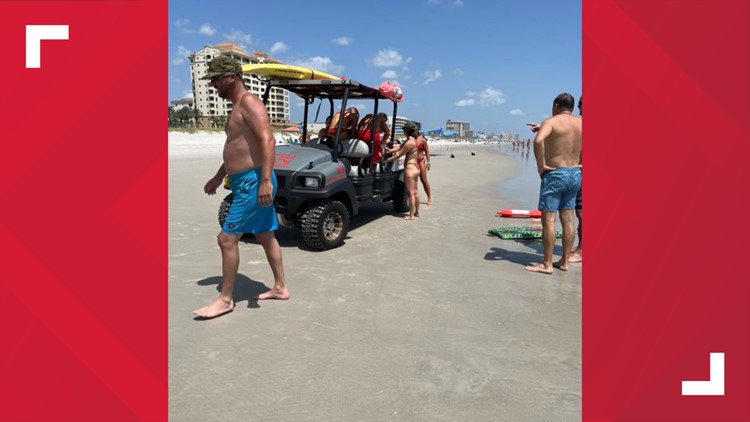 Hicks told First Coast News there was a lot of blood and his foot was “dangling”.

Ocean Rescue Lifeguards confirmed they responded to a “traumatic” injury at that location, which Hicks believes to be from a shark.

So a word for the wise, enjoy your time in Florida just be aware that the alligators and sharks are already in their natural habitats, and might act out accordingly for food and for their protection.

Biden Gets Covid AGAIN, Back Into Isolation He Goes
Pelosi Has Mental Lapse Again – This Time Over Benjamin Franklin