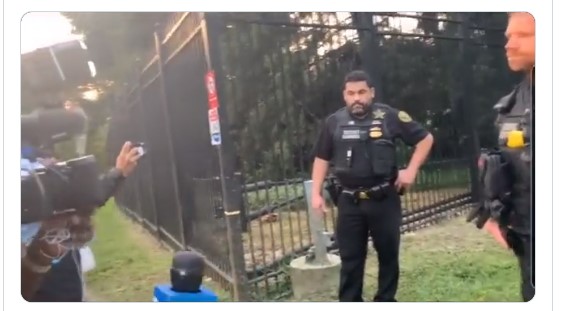 You can’t make this up America.

The Democratic leadership has their political party criticizing and demonizing anyone who supports a border wall with Mexico and who opposes illegal immigration, calling them racists, and anti-immigrants.

But self-proclaimed elites like Barack Obama and Kamala Harris, have fences around their properties and armed guards.

On Thursday morning, two busloads of over 100 illegal aliens were dropped off at Kamala Harris’ home in Washington DC.

Outside the naval observatory where Texas just dropped off two bus loads of migrants outside the VP’s residence. pic.twitter.com/vmUmduFZrT

The migrants were part of the over 2 million illegal aliens crossing the US open border this past year!

The numbers and reality fly in the face of the propganda the White House is asking the leftist media to report.

Harris during an interview last weekend told Chuck Todd that  “The border is secure.”

WATCH: The U.S. will have 2 million people cross its border for the first time. @VP: “We have a secure border in that that is a priority. … But there are still a lot of problems that we are trying to fix given the deterioration that happened over the last four years.” pic.twitter.com/d9PgV9Emwb

The US currently sees 8,000 illegals walk across the open border daily!

Hey Harris, the “the border is {not} secure.”

Last year, an additional 500,000 immigrants are estimated to have sneaked across the border illegally without capture. This year, that number is expected to approach 1 million. We have no idea who these people are, what other crimes they have committed or are committing, or what they intend to do in the United States.

Fox News interviewed some of the illegals standing outside of Harris’s residence and even they said the border is wide open.

“Yeah, we came illegally, not legal,” he said.

The inept Vice-President briskly walked past a reporter asking if she had a comment about the illegals dumped on her lawn.

“Any comment on the illegal immigrants dropped off at your residence?” a reporter asked Kamala Harris.

She arrogantly ignored the reporter and walked away.

Kamala ignores question about the illegal immigrants dropped off at her residence in DCpic.twitter.com/sVR8cxYj8L

Unlike most Americans, Kamala sent her secret service agents to guard her residence from illegal aliens.

The agents told the reporters that they needed to make sure that “everyone is safe and away from our fence” but the American people can’t have this same security.

The hypocrisy for the left is no longer shameful, but actually now considered virtue signaling.

Kamala Harris' Secret Service agents tell reporters that they need make sure "everyone is safe and AWAY FROM OUR FENCE" pic.twitter.com/HZp0m6rYYe

Sen. Ted Cruz (R-TX) put some much-needed perspective on the influx of migrants into Martha’s Vineyard this week, noting that 15,000 illegal immigrants from Haiti entered Del Rio, Texas, in a single day.

Ever since Florida Gov. Ron DeSantis (R) flew 50 migrants to the wealthy liberal enclave of Martha’s Vineyard, Massachusetts, Democrats have been calling the situation a “humanitarian crisis,” while accusing the governor of using human beings as pawns in a game of political chess.

Folks on Martha’s Vineyard are describing the burdens from 50 illegal immigrants.

To put that in perspective, the small town of Del Rio, TX has about 30,000 residents.

I was there when 15,000 Haitian illegal immigrants were crossing in to Del Rio IN A SINGLE DAY.