Schiff Condemns U.S. For ‘Escalation’ By Stopping Chinese Spying; Other Democrats Accused Of Covering For China

Communism, the political world view and system that killed over 100 million people, worldwide, since 1900.

In the twentieth century, nations such as Russia, China, Laos, Vietnam, North Korea, and Cuba placed their citizens under complete government control. These dictatorships provided minimum housing etc, to some of their population, while controlling all industries and demanding complete submission to the state in return for ensuring “equality” among the workers. 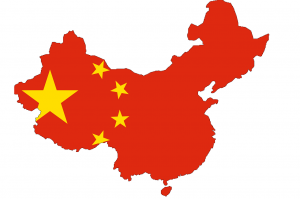 Communism tends to have an atheistic, Darwinian world view, with Marxist underpinnings.

In effect, no overarching morality except forced submission to the public expectations from their dictators. If you are a good little communist, keeping your head down, and tolerate suffering from little hope, you might make it.

So why would the Democratic party in the USA, try to work with and defend the Communist Chinese Party?

Numerous top Democrats were accused of running interference for the Chinese Communist Party this week over comments that they made on a wide range of issues.

House Intelligence Committee Chairman Adam Schiff (D-CA), who repeatedly lied during the Russian investigation, condemned the Trump administration late this week for shutting down the Chinese consulate in Houston. 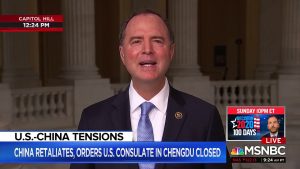 The State Department said that the consulate was closed because China had been engaging “for years in massive illegal spying and influence operations throughout the United States against U.S. government officials and American citizens.”

Schiff acknowledged that China engages in criminal activity against the United States but said that the Trump administration’s move to close the consulate was a “very dramatic and sudden escalation,” and that it was “all about politics.”

Adam Schiff runs interference for the Chinese Communist Party, says that US efforts to stop Chinese spying is an “escalation.” pic.twitter.com/W6z4Wo4Vju

On Tuesday, House Armed Services Committee Chairman Adam Smith (D-WA) was accused of defending the Chinese Communist Party (CCP) by claiming that it was not their responsibility to warn America about the pandemic.

“Talk about someone who has done a horrible job of warning us of the true dangers of the virus,” Smith continued. “You don’t like mandates? Okay, that’s fine. Let’s have the leader of our country tell us what we ought to do to protect ourselves. He is the one who is not warning the American people of the true danger of this virus.”

"It's not actually their job to warn the American people." pic.twitter.com/e8FevGR1G8

The world knows the “virus” came out of China, knows that China is involved in espionage, and is buying up large portions of foreign nations, including billions of dollars of real estate and corporations in the USA.

It is also well known that former VP Biden, used his position to get his son, Hunter, a 1.5 billion dollar contract with China, even though Hunter’s company was not qualified to fulfill the requirements of the agreement.

In the end, the 2020 Democratic Party rejects God, promotes Marxism, and is working to fundamentally change America, which means their goals line up with China’s, so thus the explanation for House members, Schiff’s and Smith’s comments.

China is not a country to trust with anything, better to cut ties, allow for limited inflation, and bring all manufacturing back home.