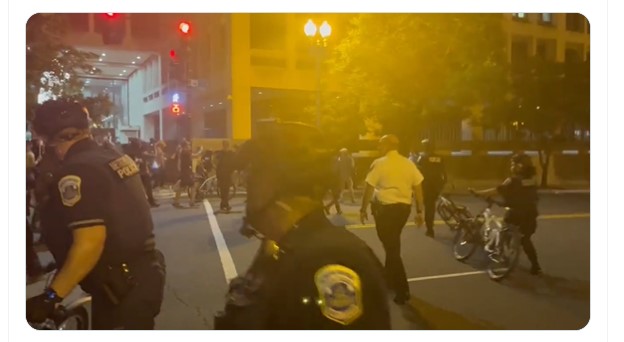 In the landmark, the Court held that the Constitution of the United States does not confer any right to abortion, and overruled both Roe v. Wade (1973) and Planned Parenthood v. Casey (1992).

As a result, radical activists have been protesting, and rioting in select cities around the U.S.

As a sign that the leftists are still clueless and/or because they are simply weak individuals, they appear to be primarily choosing to take on police in cities where the mayors are tolerant of their actions.

This reminds me of the Rodney King riots.

Los Angeles residents and other criminals drove in for the action. They chose to burn down parts of South Central Los Angeles, with primarily black and Hispanic residents, to protest the police treatment by white officers of people living in the same neighborhoods. Yes, they burnt down the neighborhood they were supposedly supporting by rioting.

The unrest began in South Central Los Angeles on April 29, after a jury acquitted four officers of the Los Angeles Police Department (LAPD) charged with using excessive force in the arrest and beating of Rodney King. This incident had been videotaped and widely shown in television broadcasts.

The riots did not accomplish anything to advance civil rights in LA, they instead allowed for the looting of black-owned businesses, destroyed dreams, and left several locals dead in the process.

Obviously, these basement-dwelling fascists, sent out by Soros-funded organizations to terrorize their own communities, didn’t intimidate very many pro-lifers in conservative cities around the nation, it just further hardened their local police in these radical areas even more.

Here is a short summary of the major cities, all with far left-leaning populations,  in which the protests are taking place.

Video of tear gas deployed on #antifa rioters in Phoenix Arizona. They were allegedly attempting to breach the capitol buildingpic.twitter.com/efr4v9zP8U

There’s…a lot going on at the pro-abortion protest in Dallas. None of it is good. pic.twitter.com/JcH9PJsakp

As a reasonable person who is very pro-choice, it is comforting to know that the small group of pro-abortion protestors really doesn’t want any blowback from local residents and the police.

They will most likely continue to act criminally in areas they can get some high fives after finishing.

Righteous things get done, when those in prayer and with conviction get involved.