ANTIFA – By definition; A political protest movement comprising autonomous groups affiliated by their militant opposition to fascism and other forms of extreme right-wing ideology.

In reality, in the US, they have shown themselves to actually be Fascist anarchists, who use violence and coercion, to try to force political change in their cities. 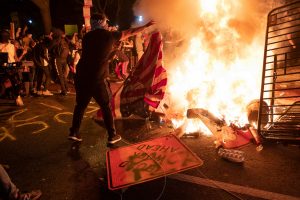 By working under the protection provided by progressive politicians and the propaganda machine, CNN, NY Times, etc, the unaware culture is confused by their antics. If they are supposed to be fighting far-right fascism, yet there are no far-right fascists in a city like Portland, what is with all the burning buildings and looting?

Simple, they are domestic terrorists who could care less about black lives but will merge with the BLM rioting to inflict more damage, even at the expense of the black Americans who are peacefully protesting.

“I think what we see with them individually targeting law enforcement, individually targeting certain officials for certain reasons, that is the definition of domestic terrorism,” Wolf told The Federalist, going on to explain, however, that the group’s decentralized nature makes it difficult for law enforcement to offer effective surveillance and widespread prosecution.

Homeland security confirms it: there's little difference between a domestic terrorist group and the actions taken by Antifa.https://t.co/jN73edM4Dl

While Wolf, who was officially nominated Tuesday to fill the post he currently serves in an “acting” capacity, characterized Antifa as a domestic terrorist group in some cases, the DHS’s mission lies primarily with protecting federal agents and property.

Wolf told congressional lawmakers earlier this month, more than 100 federal law enforcement agents sustained 277 injuries in Portland, nearly half of which were eye injuries from lasers that can cause permanent blindness.

Wolf emphasized Wednesday that while the Trump administration is offering support to state and local law enforcement agencies being overrun by the inner-city mobs, it’s ultimately up to those state and local governments to restore public safety and keep the peace. In the meantime, Wolf said, “individuals have a right to protect themselves and their businesses and what they’ve worked all their life to build.”

Awesome man for the job, and along with AG Barr and President Trump, are three are in the fight for justice.

We must re-elect President Trump on November 3rd, to keep the pressure and counter-attack going against the domestic terrorist, ANTIFA, and BLM.