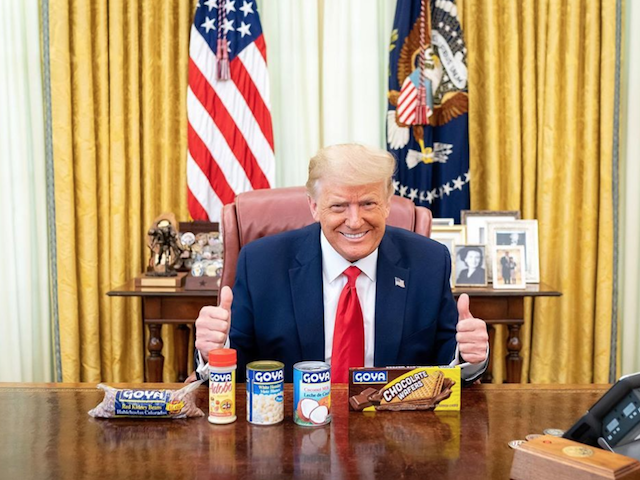 Love It! President Donald Trump Poses with Goya Beans and Cookies in the Oval Office

Hey “Deep State”, still trying to figure out why President Trump’s base is rock solid. Well besides him keeping all his campaign promised, at least those not blocked by lawsuits or rogue judges, President Trump is loyal and a fighter. So is his base, I as I wrote about yesterday – FINALLY – THE COUNTER CANCEL CULTURE STRIKES BACK! AOC’S GOYA BOYCOTT BACKFIRES BIG TIME!

After Goya Foods CEO Robert Unanue visited the White House for a Hispanic jobs initiative and said nice things about President Trump, the “Canel Culture” went after Goya, hoping to punish them for supporting the President. It backfired as Trump supporters, including my wife and I, went online and ordered their products.

The picture was posted after critics piled on his daughter Ivanka Trump for breaking White House ethics laws by posting a photo on Twitter while holding a can of Goya beans.

If it’s Goya, it has to be good.
Si es Goya, tiene que ser bueno. pic.twitter.com/9tjVrfmo9z

“If it’s Goya, it has to be good,” Ivanka wrote, adding in Spanish, “Si es Goya, tiene que ser bueno.”

The United States Office of Government Ethics requires that White House officials not use their positions to endorse any organization, product, service, or person.

Both Trumps attempted to show support for Goya after CEO Robert Unanue appeared last week and praised President Donald Trump for his leadership, prompting Democrats and the left to call for a boycott of the popular Hispanic food brand.

In response, Republicans and Trump supporters rose up to show their support by purchasing large quantities of Goya food products and posting images of their support on social media.

There will never be another President Donald J. Trump in the White House, but with a victory in November, we have 4 1/2 more years left on the Trump Train. Everyone vote conservative on November 3rd!