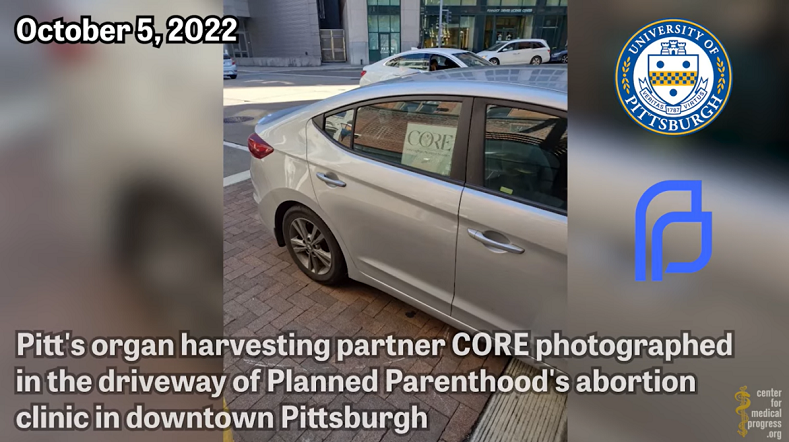 Only recently has the unethical and evil practice of encouraging and sometimes scaring women into having an abortion so their baby’s parts could be harvested and sold to clients, been brought to the public’s attention.

These clients, including universities, placed orders for body parts with death shops including Planned Parenthood, for big money.

Though the practice has been vehemently denied by Planned Parenthood, recent video footage from the sidewalk outside a Planned Parenthood abortion facility is raising new questions about the harvesting of aborted baby body parts and research at the University of Pittsburgh.

Earlier this month, pro-lifers outside a Planned Parenthood in Pittsburgh noticed someone with the Center for Organ Recovery and Education (CORE), a non-profit organ procurement group, loading what appeared to be specimen bags from the abortion facility into a cooler in a vehicle with the CORE logo, The Federalist reports.

CORE, which is based in Pittsburgh, has close ties to the University of Pittsburgh Medical Center (UPMC), with several UPMC employees serving on the non-profit’s advisory board.

“The University of Pittsburgh swore under oath that it did not harvest fetal organs from Planned Parenthood — so what is the university’s organ harvesting company doing parked at the Planned Parenthood abortion clinic with coolers?” asked David Daleiden, an undercover journalist and president and founder of the Center for Medical Progress.

“New evidence shows what appears to be small bags of aborted baby parts being mishandled outside of Planned Parenthood in Pittsburgh, with bags falling to the ground as they walk out,” said Judge Cheryl Allen with the Pennsylvania Family Institute. “This taxpayer-funded organization has a lot of explaining to do.”

Dan Bartkowiak, director of communications for Pennsylvania Family Institute, said the new video raises a lot of questions about what is happening with aborted babies’ bodies in Pittsburgh.

“If these bags contain organs from aborted babies, what are they being used for and what is communicated in the process of a woman having an abortion?” Bartkowiak said. “We deserve answers from Planned Parenthood of Western Pennsylvania, which has received over $1.2 million in tax dollars since 2017.”

The Center for Medical Progress and several doctors, including one who supports abortion, also pointed to documents and statements from university officials that suggest some aborted babies’ hearts still may be beating when their organs are harvested for scientific research.

The university commissioned an investigation into its practices last year, but Daleiden expressed doubts about the independence of the investigation in an interview with The Fix.

“Tellingly, the University of Pittsburgh thinks that hiring a law firm somehow counts as an ‘independent’ review of their barbaric experiments with aborted baby body parts,” Daleiden said at the time. “Anyone who wants a real investigation should look at the document requests nearly 100 congressional representatives made … concerning Pitt’s experiments on aborted babies.”

Last year, a University of Pittsburgh spokesman called the allegations “irresponsible and false” in a statement to Fox News. He said the university and its partners comply with all laws, and the university itself does not perform abortions.

However, the university has become a “tissue hub” for aborted baby body parts for scientific research for years. According to the documents obtained by Judicial Watch and the Center for Medical Progress, the university requested $3.2 million over a five-year period in 2015, and it has received at least $2.7 million so far.

The Center for Medical Progress said the university documents and statements confirm that some aborted babies’ hearts still are beating while their kidneys are harvested for scientific research. The documents also show that the university program has racial quotas for aborted baby body parts.