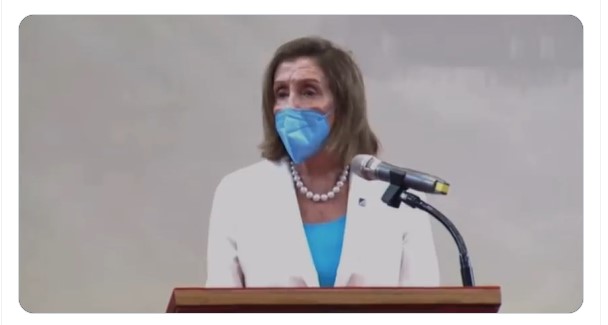 For several days before she flew into Taipei, Taiwan, Speaker Nancy Pelosi, in spite of a request by President Biden for her to not challenge China with a visit to the disputed island nation,  continued with her schedule to visit as tensions built between the US and CPP.

She was the first US House Speaker to visit Taiwan since Newt Gingrich in 1997.

In what many saw as a virtue signaling, “I am a woman” moment for Pelosi, her visit was most likely part of a final hurrah tour before losing her powerful position in the expected November Red Wave results of the mid-term elections.

Her press releases and speeches have tried to give the impression that she was assuring their government that the United States is standing with them even though technically the US is bound to stay neutral, via its One-China policy [PDF].

It is based on several documents, such as three U.S.-China communiqués reached in 1972, 1978, and 1982; the Taiwan Relations Act, passed by the U.S. Congress in 1979; and the recently declassified “Six Assurances” [PDF], which President Ronald Reagan conveyed to Taiwan in 1982.

In them, the US agreed to maintain the ability to come to Taiwan’s defense, while not actually committing to doing so—a policy known as strategic ambiguity.

On Wednesday Nancy Pelosi gave a speech to the Taiwanese where she started babbling in confusion.

Toward the end of her speech alongside Taiwan’s President Tsai Ing-wen, Pelosi’s brain underwent one of its increasingly common software glitches, causing her to begin babbling inarticulately.

Nancy Pelosi in Taiwan with wise words from “Benjamin Franklin, our presidency” on “freedom and democracy on one thing, security here.” pic.twitter.com/mElfFUoF5C

Yes, you heard it right, the number 3 person in the succession for the U.S. Presidency rambles, like Joe and Kamala, making things up or simply rambles in error frequently when she goes off a teleprompter.