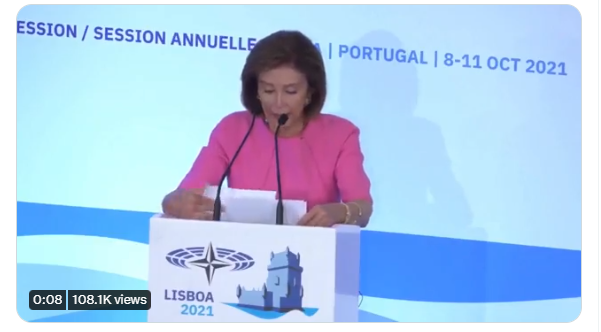 It is no secret the U.S. Speaker Of The House Nancy Pelosi believes that she is brilliant, powerful, and must be in charge.

Without term limits in place, power-hungry connected politicians like Pelosi can stay in office, up to the moment of their death if they desire, as no one dare challenge them for their seat.

One glaring example took place during the lockdowns.

With all the service businesses shut down in San Francisco, Pelosi managed to use her power to get a salon to open for her so she could get her hair cut.

In addition to exercising her power, Pelosi’s husband has made their family a fortune using insider information, his wife.

In what would qualify as a nightmare for most of the world’s population, Pelosi on Monday said she thinks a lot about what she would do if she ruled the world.

Pelosi made the remarks during a NATO Parliamentary Assembly in Lisbon, Portugal.

Speaker Nancy Pelosi delivered an address at the 67th Annual Session of the NATO Parliamentary Assembly where the Speaker accepted the inaugural Women For Peace And Security Award. Pelosi’s office announced Monday.

“Again, in fact, when people ask me, ‘If you ruled the world, what one thing would you do?’ – I think about that a lot,” Pelosi said.

“Or if any of us rule the world, what one thing would we do? And that would be easy. It would be to prioritize the education of women and girls. It would make the biggest difference not only in their lives, their families, their communities but to the world,” she added.

Pelosi said she thinks "a lot" about what she would do if she "ruled the world," during her remarks at the NATO Parliamentary Assembly in Lisbon, Portugal today. pic.twitter.com/nG5btx9rzS

The way it looks today if Biden’s popularity continues to collapse Pelosi will lose her Speakership in 2022 leading to her finally retire from congress.