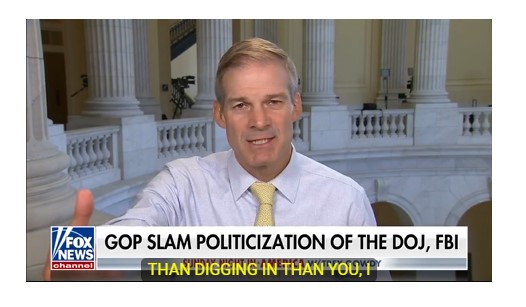 The Democratic (Marxist) Party spends a lot of effort trying to maintain a false narrative that they are the party looking out for the “underserved”.

They claim there is no longer equal justice for all and blame the police for arresting people of color.

In spite of their narrative, the same Democratic leadership is ignoring FBI whistleblowers warning about the politicization of the Bureau.

The respected historian, Victor Davis Hanson is now saying the FBI is beyond redemption.

These FBI whistleblowers who have reached out to Republican lawmakers over the past few months all have direct knowledge of wrongdoing by bureau insiders.

Republican Rep. Jim Jordan of Ohio, the ranking member of the House Judiciary Committee, appeared on Fox News’ “Sunday Night in America with Trey Gowdy” to discuss the politicization of the Department of Justice and the FBI.

Jordan said that in the week since the FBI’s raid on Mar-a-Lago, Trump’s Palm Beach estate, his constituents have expressed fear over “what they’ve seen.”

“Alright Jimmy, I want you to imagine if the FBI agent investigating Hunter Biden was as biased against him as Peter Strzok was against Donald Trump,” Gowdy said, “what do you think Politicos’ reaction would be to that?”

Jordan replied: “There would be no other news that you would see. … The template never changes with these guys. The left creates a lie. Big Media, mainstream press reports the lie. Big Tech amplifies the lie. And then when we try to tell the truth, they call us names and try to cancel us and tell the world that we’re the ones not being square with them.”

“Fourteen FBI agents have come to our office as whistleblowers, and they are good people,” Jordan told Gowdy. “There are lots of good people in the FBI. It’s the top that is the problem. Some of these good agents are coming to us, telling us this is baloney, what’s going on — the political nature now of the Justice Department — God bless them for doing it — talking to us about the school board issue, about a whole host of issues.”

“It is becoming a well-worn trail of agents who say, ‘This has got to stop.’ And thank goodness for them,” Jordan said. “And I believe they’re going to make a big change on Nov. 8.”

On June 7, Jordan sent a letter to FBI Director Christopher Wray stating that the FBI was “retaliating against FBI employees for engaging in disfavored political speech.” Jordan referred to a letter he’d sent in early May in which he detailed FBI agent accounts of having their security clearances suspended for participating in “protected First Amendment activity.” Wray did not respond.

On July 27, Jordan sent a third letter to Wray.

“We continue to hear from brave whistleblowers about disturbing conduct at the Federal Bureau of Investigation. From recent protected disclosures, we have learned that FBI officials are pressuring agents to reclassify cases as ‘domestic violent extremism’ even if the cases do not meet the criteria for such a classification. Given the narrative pushed by the Biden Administration that domestic violent extremism is the ‘greatest threat’ facing our country, revelation that the FBI may be artificially padding domestic terrorism data is scandalous.”

Jordan asked Wray to provide a series of documents by Aug. 10. There is no indication that Wray complied.

Whistleblowers have also reached out to Republican Sen. Chuck Grassley of Iowa, the ranking member on the Senate Judiciary Committee. In a July 25 letter to Attorney General Merrick Garland and Wray, Grassley said whistleblowers had disclosed wrongdoing and possible violations of the law by the agents in charge of the FBI’s investigation into Hunter Biden.

The good news is the GOP is expected to take back the U.S. House in the November mid-term elections.

This will open up the door for dozens of investigations including into the FBI, which can be held ASP.

Was Trump Betrayed by a Snitch in His Own Inner Circle?
Trump Factor – DC Purged, No Cheney, McCain, Clinton or Bush Will Be In Office 2023