Back in late 2016 and early 2017, I was told by thousands of tech workers from Google, Facebook, and Twitter, that Silicon Valley was taking a lot of heat from “letting” Donald Trump get elected.

As I was driving for a few ride-sharing companies in the Mountain View, CA area, I would pick up coders and managers from these and other companies, taking them to the various tech business and locations. Along the way, especially after the 2016 elections, I would break the ice with, how are things going at Google? 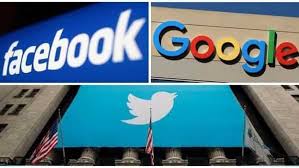 99 percent of the time, they would share the shock and comments on how the election of President Trump effected them personally and at their workplace. Some shared with me that their managers were so distraught, they had to take leave of absences to cope with the loss by Hillary and the idea of a Trump Presidency.

With me staying neutral during these conversations, there seemed to be the assumption by many, that I agreed with them, also hating Trump, and that he must not be allowed to be re-elected. Those from India and China, on VISAS, were not as concerned as the hyper “white” college-educated snowflakes, who were just holding on for dear life.

Over the following months they shared how everyone was feeling the pressure from their leadership teams, to figure out how to not let this happen again, in code, we can’t let Trump get re-elected in 2020.

Well, I ran out and set up MagaBook.com in preparation for the censorship of Trump supporters and conservatives right before the 2020 elections. I knew these people, with over 3 years to prepare, were going to use do all they could to control the messaging and help the Democratic candite win.

Unfortunately, I was right as a year ago we started to see Google search results modified, FB and Twitter ads rejected, and groups and pages deleted, only for those who content would help to re-elect Trump or give alternative information on CV-19.

Facebook has announced an October surprise in the form of a new policy that will come into place just weeks before the November election.

“We also can remove or restrict access to your content, services, or information if we determine that doing so is reasonably necessary to avoid or mitigate adverse legal or regulatory impacts to Facebook,” the new terms of service read.

The notice displayed to Facebook users of the change can be seen here:

This new policy will allow Facebook to capriciously censor content from Trump supporters in the lead up to this year’s presidential election. It is another encroachment in the real electoral interference conspiracy coming from the Silicon Valley tech giants.

This becoming a pattern for the social media giants.

Guerrilla journalism outfit Project Veritas released information on Tuesday from a Facebook insider who is blowing the whistle about the company’s biased anti-conservative content moderation policies.

Zach McElroy, who was formerly a content moderator for Facebook employed by the firm, Cognizant, spoke out against the company’s Big Brother censorship policies to Veritas.

“Facebook is, needless to say, a behemoth of a company, and most people – including most of my former coworkers who didn’t even find these abuses objectionable – would be terrified of ever speaking out publicly against them,” McElroy wrote on his GoFundMe page.

“Threatening NDAs ensured most of our silence, but nothing can stop the truth, and the courage of past [Veritas] whistleblowers gave me the confidence to step forward and expose the company for its egregious stifling of free speech and rampant abuse toward conservative voices,” he added.

2020 will be really difficult for President Trump to win.

As I reported yesterday, A LIBERAL DATA FIRM – PREDICTS ELECTION WILL BE FLIPPED TO BIDEN AS MAIL-IN VOTES ARRIVE A WEEK AFTER ELECTION

So not only is Google, FB, and Twitter messing with conservative speech and preventing pre-Trump ads from reaching undecided voters, but there are thousands of unscrupulous people, on George Soros and other payrolls, who will be part of the massive voter fraud expected before and after November 3rd.

It will take EVERY person who wants to keep America, America, to vote, educate others, and ensure they vote Conservative too.

A Trump re-election victory would be a bigger upset than 2016 and against all odds.

I for one will give it my best shot, how about you?