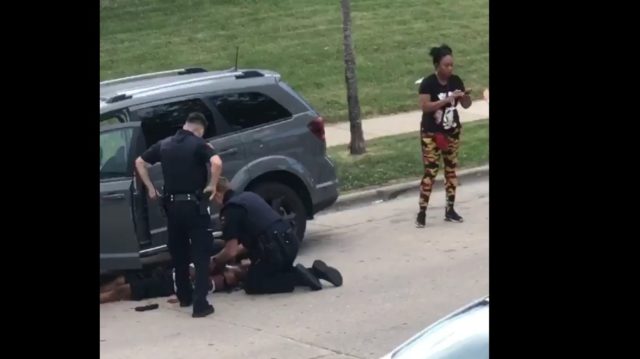 New Info On Shooting: Police Scanner Audio Shows Police Were Told Jacob Blake Had Warrant Out For His Arrest!

In less than 4 days, the narrative of what happened on Sunday in Kenosha, Wisconsin just got a boost from a police scanner recording.

Of course, the Soros funded anarchist groups are already destroying things and could care less about any of the facts. They are not concerned about black Americans, they are focused on dividing our country and getting those who are willing, to burn down their cities.

The recording, from a Kenosha police scanner, indicates Kenosha, Wisconsin, officers opened fire on Jacob Blake less than five minutes after a woman called the police.

Why is this important to know?

The officers were heading to a home where a man was taking someone’s car keys and had a warrant out for his arrest.

“According to the audio obtained by Madison365, someone called police to report that Blake was at her home and wasn’t supposed to be and that he had taken her keys and was refusing to give them back. A dispatcher relayed this message to patrol officers at about 5:11 pm Sunday,” Madison365 reported.

“About 30 seconds later, she let patrol officers know that there was ‘an alert at this address for a 99 for this subject,’ apparently to indicate that a warrant had been issued for Blake’s arrest. Court records indicate a warrant was issued on three charges — two misdemeanors and one G-class felony — on July 7. Court records indicate no previous criminal charges in the state of Wisconsin.”

During the eight-minute audio, the police dispatchers says of the caller: “She became uncooperative, She said that he left and then she hung up.”

The audio indicates that police knew there was an arrest warrant out for Blake. But media reports have not said that. For instance, the BBC reported on Tuesday that: “Court records show there was an active arrest warrant against Mr Blake, related to charges of sexual assault, trespassing and disorderly conduct. But it is unclear if police were aware of this at the time of his shooting.”

Once they arrived, things quickly escalated as the suspect, Jacob Blake, is seen one video wrestling with the police, and another one from the other side of the car, showing him march away from the police, open his car door, with a gun in his back, and reach in any way.

Here's a video of the shooting that happened in Kenosha, Wisconsin. This video shows the shooting of Jacob Blake from a different vantage point. pic.twitter.com/d2CYIis6Zm

A graphic video posted on social media shows Blake walking around the front of an SUV and getting into the driver’s side when police opened fire.

Sad. Jacob Blake looks like he could have been grabing a gun. He wouldn’t have got himself shot if he had just followed the cops’ reasonable instructions in Kenosha WI. pic.twitter.com/rkYxJr0Pkp

To bring it all together.

Someone called the police reporting that Jacob Blake was trying to take her car keys, but eventually, he leaves and the caller hangs up with the dispatcher.

The police officers were told Jacob Blake, who had previous run-ins with the police, was trying to take someone’s keys and had an outstanding warrant out for his arrest.

Once they arrive, the police attempt to subdue, arrest, Blake, but he was able to break free and for some reason, yet unknown, decided he was going to go around the car and reach in.

With the officer, holding on to his shirt did not know, was why was he ignoring their commands, and what was he planning on getting out of his car, a gun?

In self-defense, the officer shot Jacob Blake, yes in the back, because that was the area exposed while Blake was reaching in the car.

Next, I hope we get a police cam video, from the officers.

In the meantime, we wait for justice as the city was just rocked by a white supremacist youth. He has been identified as the one who shot the protesters last night, killing 2.