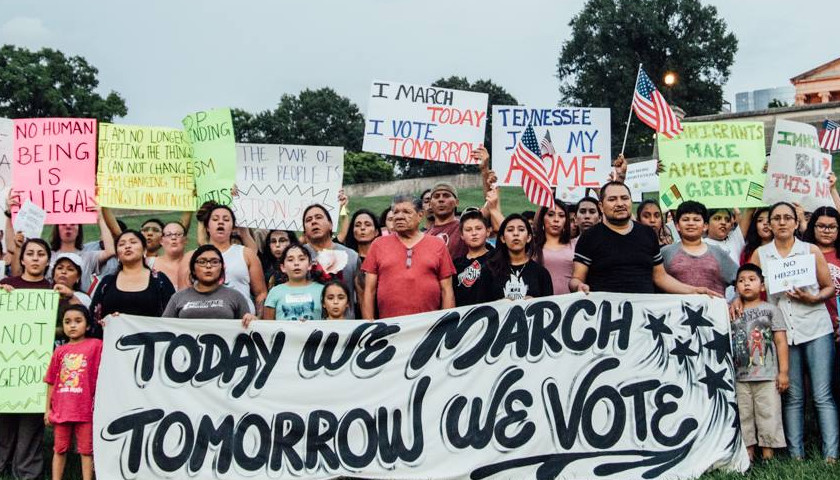 The reality of excessive immigration could be on display on November 3rd.

America is a unique country, with guaranteed rights coming from God, but unfortunately poorly managed.

While millions of Americans wer eon food stamps and unemployed, the US government allowed

The number of new foreign-born voters, naturalized since 2014, exceeds the 2016 margins of victory in a number of swing states, new data reveals.

Analysis from the National Partnership for New Americans finds that in swing states such as Florida, Michigan, New Hampshire, Pennsylvania, and Nevada, the total number of foreign-born voters who have entered the electorate since 2014 exceeds the margins of victory from the 2016 presidential election.

In Michigan, for instance, Trump won the state in 2016 by 10,704 votes against Democrat Hillary Clinton. Between 2014 to 2018, nearly 64,700 new foreign-born voters have entered the electorate in Michigan — including more than 13,500 Iraqi immigrants.

In other swing states like Arizona, Minnesota, and Wisconsin, the margins are increasingly close and could be surpassed come election day.

Similarly, in Minnesota, more than 41,200 new foreign-born voters have entered the electorate — primarily from Somalia, Ethiopia, and Mexico. Clinton won the state by almost 44,600 votes. By 2020, the total could be more than 76,000.

The margins would likely be even larger on November 3 if not for a slowdown in naturalizations. Foreign nationals waiting to become naturalized American citizens is growing as the United States Citizenship and Immigration Services (USCIS) agency grapples with a backlog spurred by the Chinese coronavirus crisis.

The Washington Post interviewed a number of foreign nationals hoping to vote in the 2020 election — nearly all suggesting they will cast their ballot for Democrat presidential candidate Joe Biden:

“I decided to become a citizen for my voice to count and for the Latinos and all the minorities to be counted, and to be one more in this country,” said Rutilia Ornelas, 65, who applied for naturalization 20 years after becoming a permanent resident in hopes of voting for the Democratic nominee this November. [Emphasis added]

But with his application stalled, Muhammad said he is finding other ways to make his voice heard. Inspired by the recent Black Lives Matter protests and the push to fight systemic racism, he has marched alongside protesters with a homemade sign carrying quotes by Martin Luther King, Jr. and donated to racial justice groups. He said he has begun to see grass-roots activism as a powerful way to speak out — perhaps even more powerful than electing any one politician into office. [Emphasis added]

While hundreds of thousands of naturalization applicants have seen delays, others are ready to vote in the election, according to Five Thirty Eight:

Take someone like Raz Ahmadi, a new U.S. citizen from Afghanistan. For the past five years, he has worked as an organizer registering voters and advocating for progressive environmental policies in Virginia. And this year, after completing the naturalization process, which had been interrupted by COVID-19, in mid-July, Ahmadi will finally be able to cast his own ballot. [Emphasis added]

Despite a drop in naturalizations this year, the rate at which the United States gives American citizenship to immigrants remains high.

Most recently, Axios reported that the “growing foreign-born populations are expected to help Democrats” defeat Trump in the election. The report was just the latest admission by the establishment media that record high legal immigration levels overwhelmingly favor Democrats electorally.

The Washington Post, New York Times, The Atlantic, Axios, the Los Angeles Times, and the Wall Street Journal have all acknowledged the trend.

“The single biggest threat to Republicans’ long-term viability is demographics,” Axios reported last year. “The numbers simply do not lie … there’s not a single demographic megatrend that favors Republicans.”

In this year’s election, about 1-in-10 voters will have been born outside the U.S. — the highest level of foreign-born voters in the electorate since 1970.