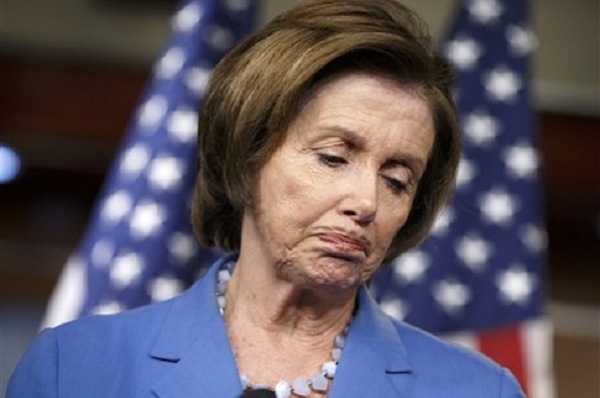 Nancy Pelosi: It’s an “Injustice” That Americans are Not Forced to Fund Abortions

Speaker Nancy Pelosi today talked about Democrat leaders want to overturn the Hyde Amendment, which has protected taxpayers for decades from having to directly pay for abortions with their tax dollars. Pelosi said it’s an “injustice” that Americans are not forced to pay for killing unborn children.

Her comments came during a press conference, where a reported asked her, “There is also a push [by Democrats] to take out the Hyde Amendment?”

Democrats are trying to force Americans to fund both abortions directly by ditching the Hyde Amendment as well as forcing them to fund the Planned Parenthood abortion business, which kills over 330,000 unborn babies every single year.

The Hill reports pro-abortion Democrats’ latest effort is part of a $66 billion spending bill for state and international operations.

Sponsored by House Appropriations Committee Chairwoman Nita Lowey of New York, the legislation would permanently repeal the Mexico City Policy, which prohibits taxpayer funding to international groups that promote and/or provide abortions, according to the report.

When Trump reinstated and expanded the policy, he defunded two of the world’s largest abortion chains, the International Planned Parenthood Federation (IPPF) and Marie Stopes International, of about $170 million in American tax dollars.

As a result, Reuters reported IPPF shut down more than 22 programs in sub-Saharan Africa. Marie Stopes International also shut down several of its programs in Africa because of the cuts.

The International Planned Parenthood Federation reported more than 1 million abortions in 2016 while receiving about $27 million in U.S. tax dollars from the Obama administration.

The Democrats’ bill would restore that funding, as well as additional money that Trump cut off to the United Nations Population Fund (UNFPA), an international abortion advocacy group that has been linked to forced abortions and sterilizations in China.