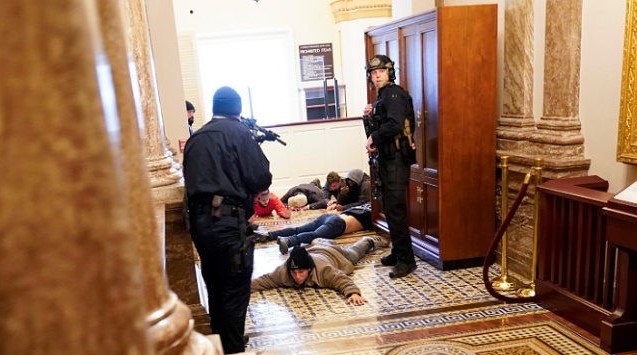 As the democrats desperately look for anything that will turn the tide of public disapproval against their failing leadership, new dirt on Speaker Pelosi’s failed actions on January 6th, to protect the Capital, has been UnEarthed.

Dated June 4, the report reveals several mistakes were made in the department including delayed mobilization of specialized civil disturbance units and the dismantling of an intelligence unit that tracked threats on social media, according to a report obtained by Just the News.

The report specifically reveals the Capitol Police had received intelligence reports from agencies like the FBI warning that violence could occur on January 6. But those reports were not properly used to create an operational plan before January 6.

“The assessment for 1/6 contained a BLUF [bottom line up front] that did not express the severity of the threat or the fact that USCP [U.S. Capitol Police] actually had knowledge of a plan in place,” the report reads. “The statement that protesters may be armed was included, but it was never expressed with the urgency that they planned to overtake the Capitol and target Members of Congress.”

Things were made worse by Pelosi, who decided to disassemble the police department’s intelligence unit that tracked threats on social media. If it had still been in place, might have been able to use social media activity to alert the police of the potential seriousness of the protest.

“The social media unit was immediately and essentially dismantled under the new leadership,” the report said. “New office reassignments and steering away from the concepts of having subject matter experts may have contributed to the tragedy.”

“Individuals with the most experience extrapolating open-source material were not tasked with reviewing social media to glean intel related to the event,” the report stated.

As Pelosi failed at her task of protecting the Capitol, Trump had taken action to secure the area.

“Do whatever is necessary to protect demonstrators that were executing their constitutionally protected rights,” Miller testified Trump told him.

Former Attornet General Barr, who is well aware of what took place on the 6th, doesn’t believe there is much in the record that the Democrats are going to be able to tie to former President Trump, which is their entire goal of this witch hunt.

"…they're not going to have very strong evidence against the President." pic.twitter.com/uuIiVILL7k

Once again the Dems are going to come up empty, similar to the failed Russia Hoax investigation.

The reality is, they don’t have plan B, so stand by America.

Keep your eyes on the center stage of the January 6th circus, going live this Thursday evening.