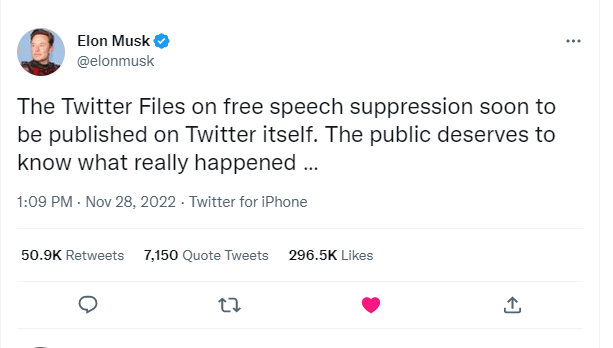 For those of us that can remember the pre-social media years, information online was scattered and it was difficult to connect with others outside our circle of influence.

But things started to change as technology and market timing hit at the same time.

In February 2004, in Cambridge, MA, Mark Zuckerberg’s Facebook was launched.

On March 21, 2006, in San Francisco, CA, Twitter launched and quickly became the go-to online destination for those seeking to hear from media influencers and stay informed on what was trending in the news.

Unfortunately, as Twitter grew in size and employee count, the platform’s management, led by Jack Dorsey, stopped functioning as an open town square.

The increasingly “woke” management allowed their leftist engineers and content managers to operate the social media platform more like Communist China, dictating what was approved speech that could be distributed, without heavy censorship.

Following former President Trump’s shocking 2016 victory, Twitter’s management along with Google and most of Silicon Valley collectively went into not happening again mode, which included the suppression of conservative and other unapproved speech.

The censorship hits its climax when Dorsey’s company actually de-platformed the sitting President of The United States as well as other conservative influencers shortly after.

Their stated rationale for removing individuals from its platform has always been vague, and disingenuous.

Well, things have changed exponentially following Elon Musk’s acquisition and subsequent conversion of Twitter to a private company, leaving him the sole decision-maker.

After researching the data internally, the $trillion man confirmed last week that Twitter had been limiting the reach of conservatives.

“As is obvious to all but the media, there is not one permanent ban on even the most far-left account spouting utter lies,” Musk said.

“Not even Associated Press with their completely fictional report on Russian missiles hitting Poland that carried severe consequences for escalating the war.”

On Monday, Elon Musk announced that he will publicly release the “free speech suppression files” on Twitter, adding that the public needs to know what really happened.

The Twitter Files on free speech suppression soon to be published on Twitter itself. The public deserves to know what really happened …

Musk also commented on one tweet declaring “a revolution against online censorship in America.”

A revolution against online censorship in America

I have personally seen an upturn in traffic and activity to my posts, but time will tell to what extent the changes that Musk implements, will have for us everyday users on his social media platform.

Tucker Calls Out Fauci For Trying To Quietly Retire
Shocking, Cambridge Dean Claims Jesus Could Have Been Transgender