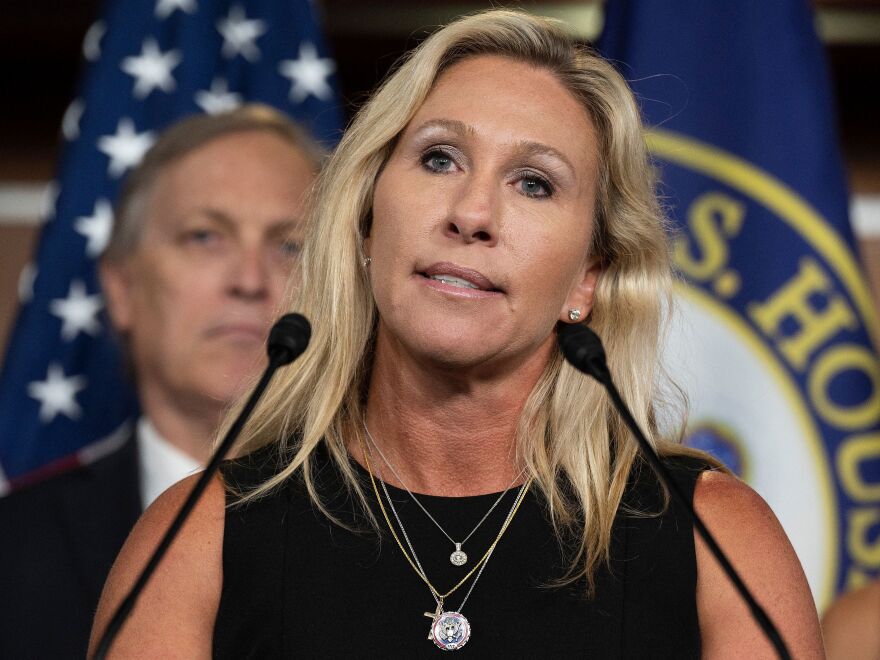 The Founding Fathers of the United States took painstaking measures trying to prevent tyranny from forming in the federal government. They set up three separate but equal branches, one of which is the US House of Representatives.

As per the Constitution, the U.S. House of Representatives makes and passes federal laws. The House is one of Congress’s two chambers (the other is the U.S. Senate) and part of the federal government’s legislative branch.

Elected every two years, these representatives have regular contact with their local constituents.  They spend 6 months of every term convincing voters in their district they are looking out for their interests. If successful they get another 2 years, if not they can be replaced with a simple majority vote on election day.

Rep Marjorie Taylor Greene (MTG) of Georgia boldly takes on the “swamp”, on Capitol Hill, earning her favor with voters but out-right disdain from the political elitists who don’t want to be held accountable.

Affectionately known by her supporters as MTG, Marjorie is now calling for an official audit of “every single penny” in taxpayer money that the United States government has sent to Ukraine.

“I’m calling for an audit of every single penny that has been sent to Ukraine,” the Congresswoman tweeted on Wednesday.

“This must be done as soon as possible for the American people. Taxpayers deserve transparency and they deserve to see where their money is going,” she added, including a video of her speaking on the floors of Congress.

I’m calling for an audit of every single penny that has been sent to Ukraine.

This must be done as soon as possible for the American people.

Taxpayers deserve transparency and they deserve to see where their money is going. pic.twitter.com/WKg7YuPfFI

This warning shot at the White House is crucial as President Biden has already sent the corrupt nation of Ukraine over $60 billion dollars, and just approved another $37 billion emergency aid package for the Zelensky regime in Kyiv.

The Congresswoman from Georgia pointed out that the administration has no problem funding border security for Ukraine while refusing to secure its border.

For many Americans, DHS must also be held responsible as millions of illegal aliens are streaming across the southern border bringing with them a massive amount of fentanyl, they are involved in human trafficking and are committing crimes that are affecting, even killing citizens around the nation.

“Yet the Biden administration and this Congress has not done anything to protect our nation’s border and the American people. Just to remind everyone, the building that we’re standing in, the federal government, and everyone’s paychecks here is paid by the American taxpayers,” she added.

“And the American taxpayers and the American people deserve to have a secure border and deserve the protection of the federal government from the Mexican cartels that funnel drugs into America to kill Americans,” Greene said.

Greene called for an audit of all money sent to Ukraine in order for American taxpayers to have some transparency.

“I’m calling for an audit of every single penny that has been sent to Ukraine, including aid money, and any other monies that have been given to the Ukrainian government to defend their national security, while our national security has been ignored,” Greene said.

“This must be done. It has to be done as soon as possible for the American people. They deserve transparency and they deserve to see where their money is going,” said Greene.