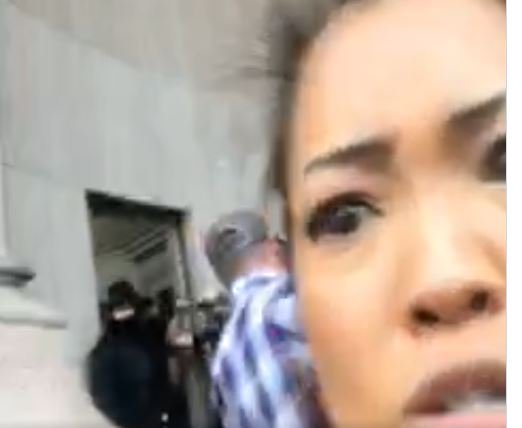 The current state of the anarchy in progressive cities was on display again today in Denver, CO.  A pro-police rally was overrun by domestic terrorists from BLM and ANTIFA, with the police not getting involved until the violence broke out.

Instead of restoring law and order in Denver since the riots started in June, @DenverPolice Chief Pazen, who marched with BLM last month, had actually contacted the pro-police group, in advance, asking them to reschedule today’s event, but only allowed it to move forward because of their 1A right to free speech.

The pro-police rally had been billed as a family-friendly event with music, speakers and food, and was promoted by Randy Corporon, an attorney who has recently represented two businesses in high-profile legal disputes about coronavirus precautions. Corporon represented C&C Breakfast and Korean Kitchen, a Castle Rock restaurant that was shut down by the state after it opened for dine-in eating on Mother’s Day, as well as Bandimere Speedway, which faced legal action from county health officials when a July 4 event saw large crowds and limited social distancing.

The anti-police protesters greatly outnumbered the pro-police crowd and moved into their rally’s space in the park’s amphitheater shortly after the demonstration supporting law enforcement started around 3 p.m.

The protesters banged drums, blew whistles, clanged pots, clapped and shouted obscenities to drown out the pro-police rally, where a band had been playing music to a small crowd. The chaotic clash between groups led to some violence, with several people throwing punches in isolated disputes. Law enforcement officers attempted to form a line around the two groups, but could not completely separate them.

According to Gateway Pundit

Leading conservative activist and entrepreneur Michelle Malkin was attacked by Antifa and Black Lives Matter thugs Sunday at a “Back the Blue” rally in support of police at the Civic Center Amphitheater in Denver. Ironically, the Denver police on the scene did not intervene at first, apparently under orders by police Chief Paul Pazen who marched with BLM protesters last month. 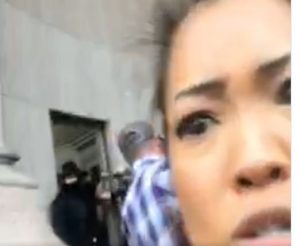 Screen image of one of the Black Lives Matter and Antifa attackers. 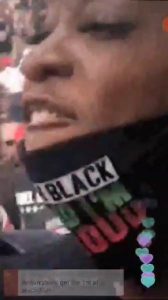 Malkin says she was not hurt in the attack in which Antifa and BLM thugs rushed and took over the stage, though video shows her being roughed up. The attack was recorded on Malkin’s Livestream Periscope video.

Yes you can watch how it all unfolded here ==> @DenverPolice Chief Pazen, who marched with BLM last month, let pro-police patriots get beaten and silenced==> https://t.co/VDrJrhHPHF https://t.co/S9qzlM15c0

After about an hour, most of the pro-police demonstrators left the plaza, and police also began to retreat. The anti-police protesters followed officers as they retreated and at least one officer fired pepper spray into the crowd of protesters.

Minutes later, protesters stood in front of a police vehicle to try to stop it from leaving, and officers again used chemical agents and less-than-lethal weapons before speeding away. 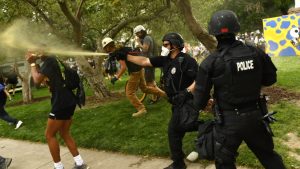 Completely unexpectable for the police to allow ANTIFA and BLM to assemble anywhere. The First Amendment guarantees ” the right of the people peaceably to assemble”. These groups don’t peaceably assemble, but instead are well funded, Fascist agitators with weapons used to enforce compliance from those who speak out. Until the government does their job and shuts down these terrorists, they have won the war in all the cities they have laid claim to. So wrong that it is shocking to see it taking place in our great country.