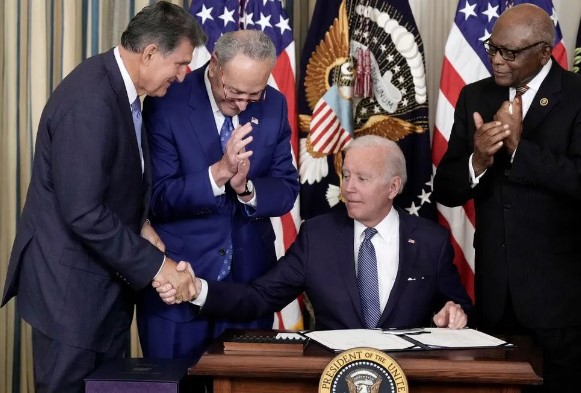 For several months West Virginia Democratic Senator Joe Manchin was the most hated member on Capitol Hill, at least by radicals who wanted President Biden’s agenda items pushed through.

Manchin’s main objection to the BBB massive spending bill was that he, like Barack Obama, said he believes you should not increase taxes during a recession.

Following Manchin’s caving and agreeing to vote for a scaled-back version of the bill last week, Manchin admitted on Tuesday that the so-called Inflation Reduction Act will actually not have an immediate impact on inflation.

The comments came on the same day that President Joe Biden signed the controversial bill into law.

“Why would it?” Manchin reportedly responded. “Well, immediately it’s not. … We’ve never [said] anything would happen immediately, like turn the switch on and off.”

He then shifted away from his objection to raising taxes and claimed that raising interest rates should not be done, which the Federal Reserve has repeatedly done in recent weeks to stave off inflationary pressures.

“We’re fighting like the dickens. You got to produce yourself out of this,” Manchin claimed. “If you think that you’re going to wait on the Federal Reserve to raise rates, discourage you from buying anything, [and] that’s going to take care of our inflation — that’s not how you take care of inflation.”

Economists, however, disagree. For example, famed economist Nouriel Roubini just this week called on the Federal Reserve to take more aggressive action — even raising baseline interest rates above 5% — to prevent inflation from “getting out of control.”

Meanwhile, Vaughn also asked Manchin about the clean energy tax credits in the law, which reward Americans who install solar panels on their homes or purchase electric vehicles.

“That’s not going to be overnight,” Manchin said of the benefits. “They have incentives to do that, to help them. Trust me, if you have something going bad in your home where you’re replacing it, and you have some assistance you’re thinking of, that might be of help.”

To summarize, Manchin is deflecting the attacks against him by stressing that Americans should wait up to 10 years to see if he was right after all.